I booked L’s birthday dinner at Sushi Hachi Japanese Restaurant. Run by a husband and wife team, Sushi Hachi is open from Tuesday to Saturday, 6:00 p.m. to 9:00 p.m. Reservations are required, as the small restaurant is perpetually booked. 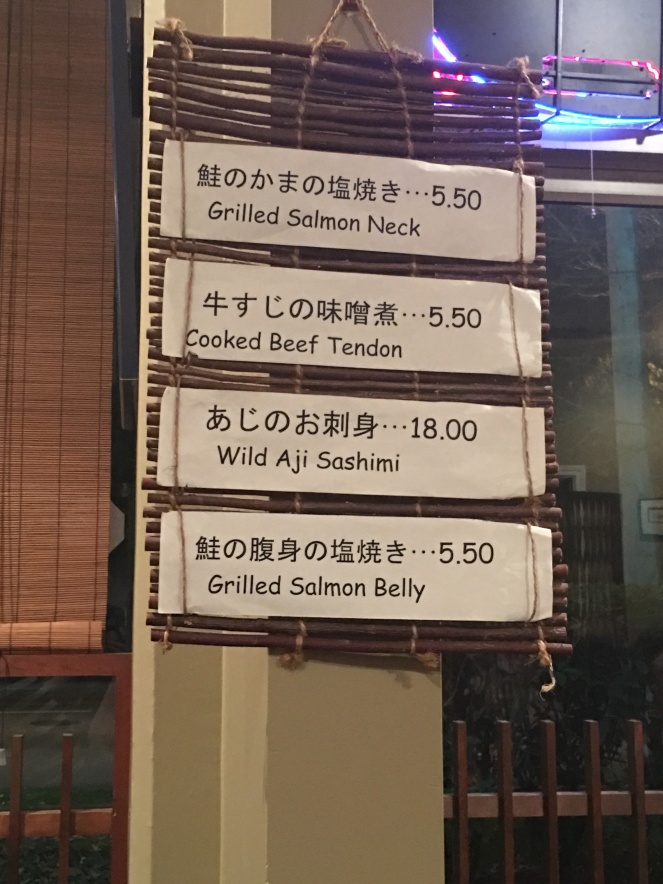 I invited N and Beep Beep to L’s dinner. N asked if she could bring her new gentleman friend A-OK. When I spoke to the owner to request an extra seat, I confided to the owner that I was excited to dine at his restaurant. He sounded pleased, but cautiously mentioned that he only serves sushi and sashimi. There is no teriyaki or tempura on the menu. I told him that was fine with me, as I’ve been to Japan before and I’m aware of the difference between real sushi and the North American version. He sounded worried and humbly stated that he didn’t want to get my my hopes up, as his sushi is not as good as what you can get in Japan. For this post, let’s listen to “Saw You in a Dream” by The Japanese House.

When we were seated, L commented that he knew Sushi Hachi was a good restaurant based on the tantalizing smells wafting from the kitchen and sushi bar. Unfortunately, the description of the food we ate won’t be as detailed as I would have preferred. Beep Beep and I were too busy sizing up A-OK. I usually hate the guys N dates, but A-OK was a refreshing break from the norm. 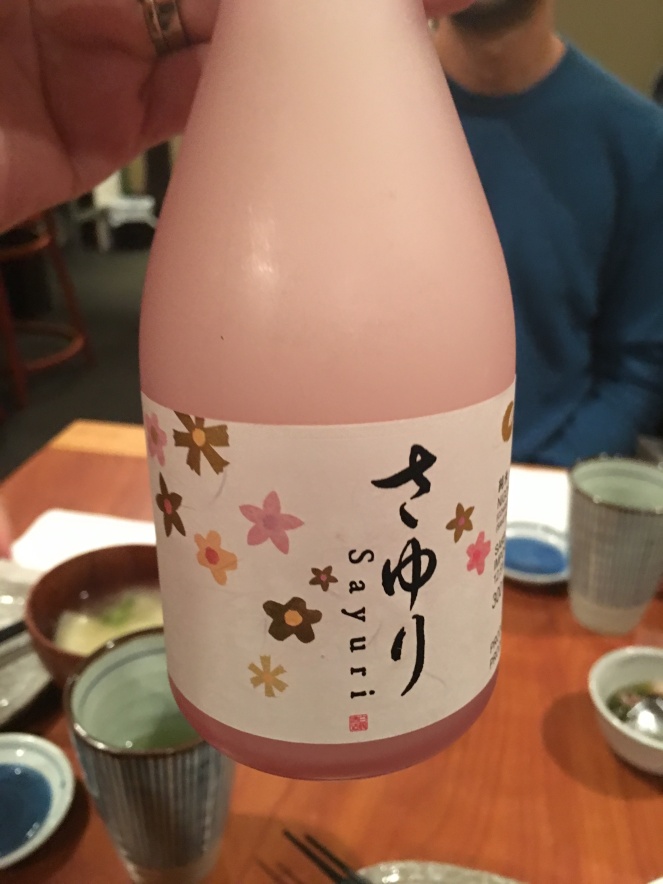 A-OK and I shared a bottle of cold sake – Hakutsuru Nigori ($17). The flavour was floral, lush and milky in texture. L, Beep Beep and N refrained from drinking alcohol. Beep Beep was driving. L wanted a good sleep. N just came back from her second ayahuasca trip in Peru. Her shaman said she could eat seafood again, but not alcohol, meat or soy sauce. I asked A-OK if the next time, he could slip the shaman an extra twenty bucks so N could eat meat again.

The Miso Soup ($2) was subtly different from the norm. I read in other reviews that the female owner makes her fish miso in small batches. Each bowl contained a collarbone.

I ordered four Chef’s Special ($120) – a selection of ten pieces of nigiri and tuna maki. We were given a description of each fish, but I didn’t have time to write any of the names of the fish down. 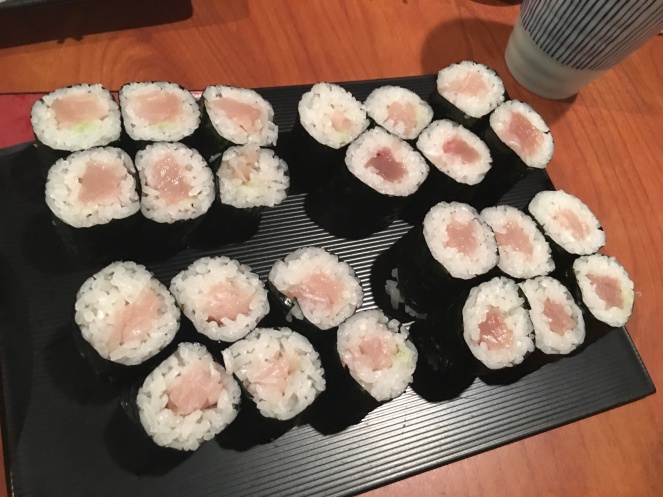 The balance of vinegar and sugar in the rice was perfect. The temperature of the rice was neither cool or warm. I noticed the rice was a bit softer than I’m used to. L and I liked the proportion of fish to rice.

My favourite piece was the bright white glossy piece – it was both crunchy and creamy. The simplicity of garnishes on the nigiri still let the freshness of the seafood shine through.

The scallops were tender and sweet. My favourite version was the chopped scallop. There’s just something so winning about the combination of delicate scallops and the rich egg flavor of velvety Kewpie mayonnaise.

I enjoyed crunching into the raw prawn ($3.50). Cold, sweet and with a texture that was both gooey and crunchy. The uni ($4.00) was the most buttery and briniest I’ve ever had. I’d order this again.  L ordered an extra piece of his favourite sushi –  tako ($2.50).

L noted he’s never tried so many pieces of white fish, each with its own unique flavour. All the seafood tasted pure and clean. 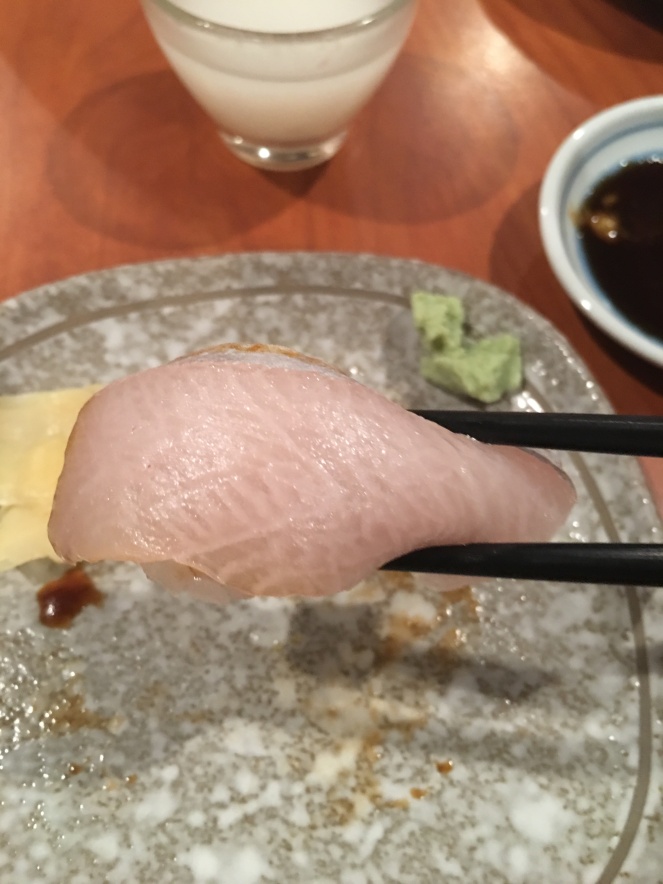 A-OK also ordered the Grilled Squid ($10.50).  The squid was tender and the juices were reminiscent of charcoal. This dish was simple and delicious.

N ordered a Tempura Roll ($6) because she was still hungry. She took one piece and announced she was full.  I ate a couple of pieces.  The roll was crunchy and warm from the tempura, made even tastier with a generous slathering of mayonnaise. 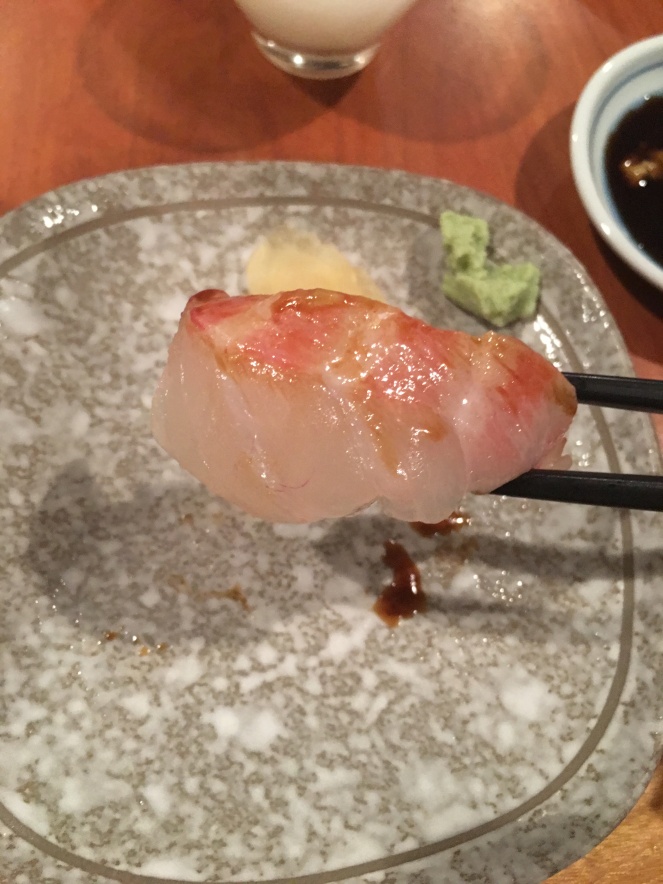 N mentioned that while she can eat fish, she only wants to eat white fish. She felt that the fish with a pink tinge was closer to meat. I disagreed but didn’t feel the urge to argue with her. I’m not a hot shot shaman.

My favourite part of the night was when L thanked the sushi chef. In Japan, locals go crazy over my husband’s enunciation while I am generally frowned upon for breaking protocol. After L broke out his perfect Japanese, the  chef’s expression didn’t change and he simply nodded to L.  When I went to thank the sushi chef in English, he beamed and bestowed me with a big grin. Take that L.

Sushi Hachi is a gem. Now that L and I are no longer going on our annual trip to Japan, we can look forward to dining at Sushi Hachi. I’m eager to try more of the adventurous seafood on their sushi menu. Hitting the Sauce gives Sushi Hachi two fat thumbs up.