For a long time, I’ve been salivating over Pho Da Bao’s Instagram photos of their sate pho with bone marrow. On Sunday, I convinced L to make the drive over to Forest Lawn. For this post, let’s listen to “Long Time” by Blondie.

I was expecting a hole-in-the-wall restaurant. We were surprised to see that Pho Da Bao was anything but your typical pho joint. The branding of the sign was modern and eye-catching. The ceilings are pretty with the dropping stars. The fish swimming in the tank are gorgeously coloured and looked healthy.

I ordered Pho Da Bao’s signature dish – Pho Sate Ga Hoac Bo Hac Do Bient – a spicy sate beef ($13). I didn’t add the bone marrow because I looked up the calorie content and saw it was 1,000 calories. I tore up basil leaves and dumped all the sprouts into my bowl.

The beef broth was creamy and tasted like there was coconut in it. I enjoyed the deep, spicy notes. The meat was silky smooth and tender. The broth was served piping hot and  remained warm for a good 15 minutes. I thought the pho was very good. 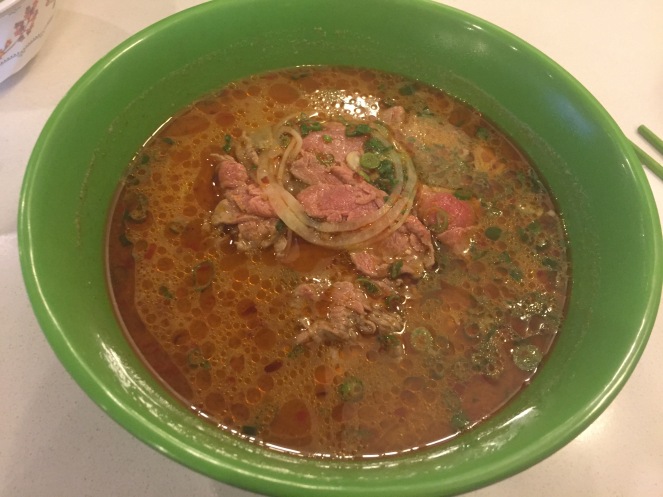 L ordered Bun Thit Nuong Cha Gio ($13). The grilled pork was nicely grilled and of good quality. The bowl contained the usual suspects – fresh lettuce, bean sprouts, chunks of cucumber and carrots. The fish sauce was pungent and not overly sweet. I thought the bun was noodle heavy compared to the proportion of meat. 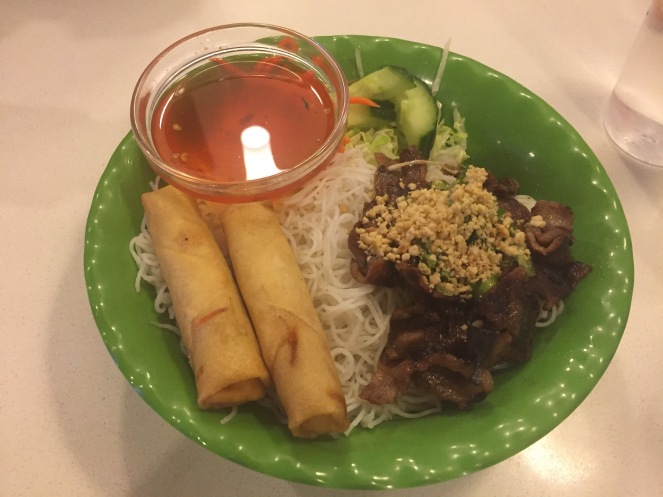 I was still hungry so I ordered Cha Gio Banh Trang ($8) – gluten-free taro and pork spring rolls. This appetizer is a winner. Reminds me of a simpler version of Duncan Ly’s imperial rolls at Foreign Concept. 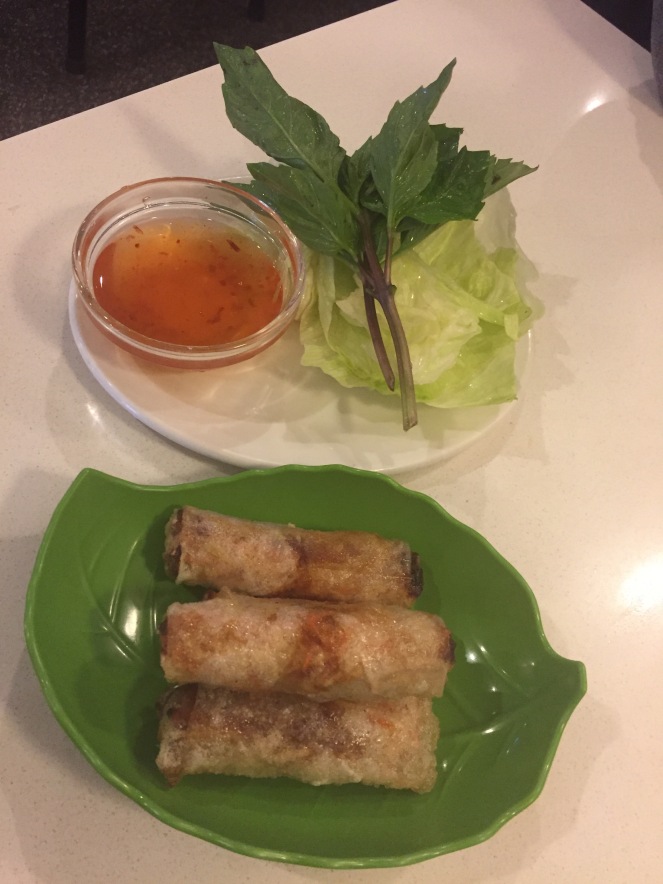 To assemble this masterpiece, you take a piece of iceberg lettuce, basil leaves and a spring roll, then wrap it up and dip it into fish sauce. I found this appetizer refreshing. A tantalizing mix of cool from the basil and lettuce and hot from the crispy spring roll. 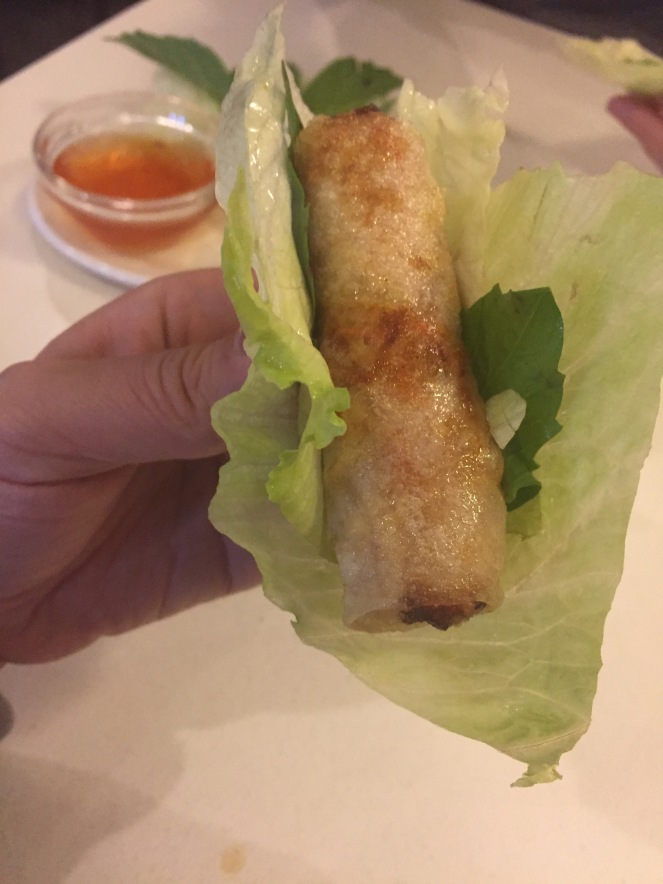 It’s messy to eat – the water from the lettuce would intermingle with the fish sauce and drip on my hand. If you visit Pho Da Bao, I would recommend the pho and taro pork spring rolls. 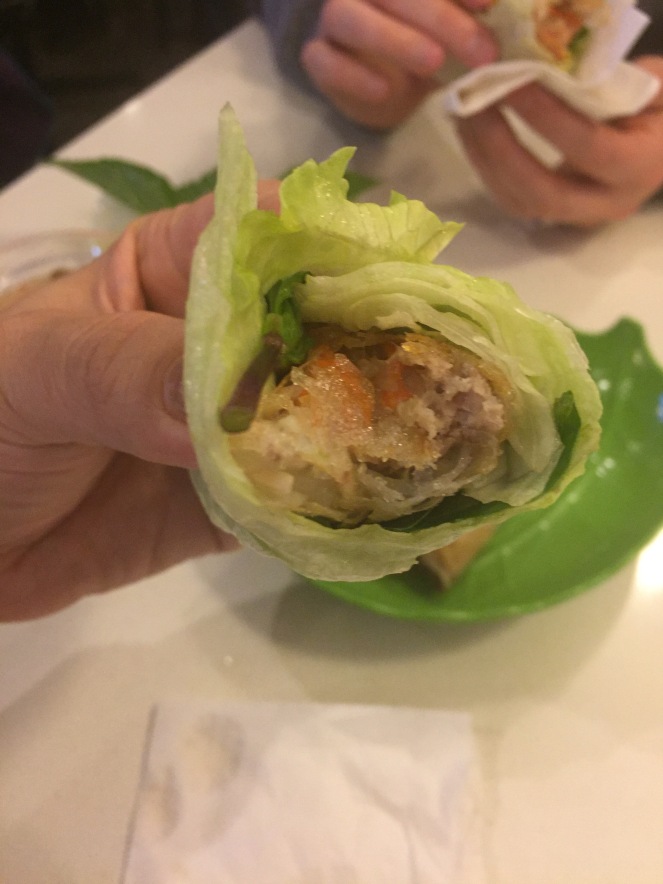 The portions are smaller than what I’m use to. I told Loaf2go and she said her husband gets the large sate pho and he’s stuffed, so it’s likely just me. The pho is worth the price, as it’s a step above their competitors.

I’m curious to compare Pho Dau Bo with its next door neighbour – Noodle World. I hear Noodle World has more uncommon dishes, like dried noodles with crab, sweet and sour soup with fish, braised fish clay pot, caramelized fish, and red fried rice. Beep Beep is coming for my birthday next week. I will likely convince her to go with me as she’s easygoing and doesn’t really care where we eat.