My parents make a fuss over L when he visits. A week before we arrived, Ludwig and Boss Lady emailed back and forth, debating which dim sum restaurant they should take him to. L decided on Fisherman’s Terrace Seafood Restaurant, which also happens to be Boss Lady’s favourite spot. L said after lunch, he and Ludwig could get crepes in the food court. 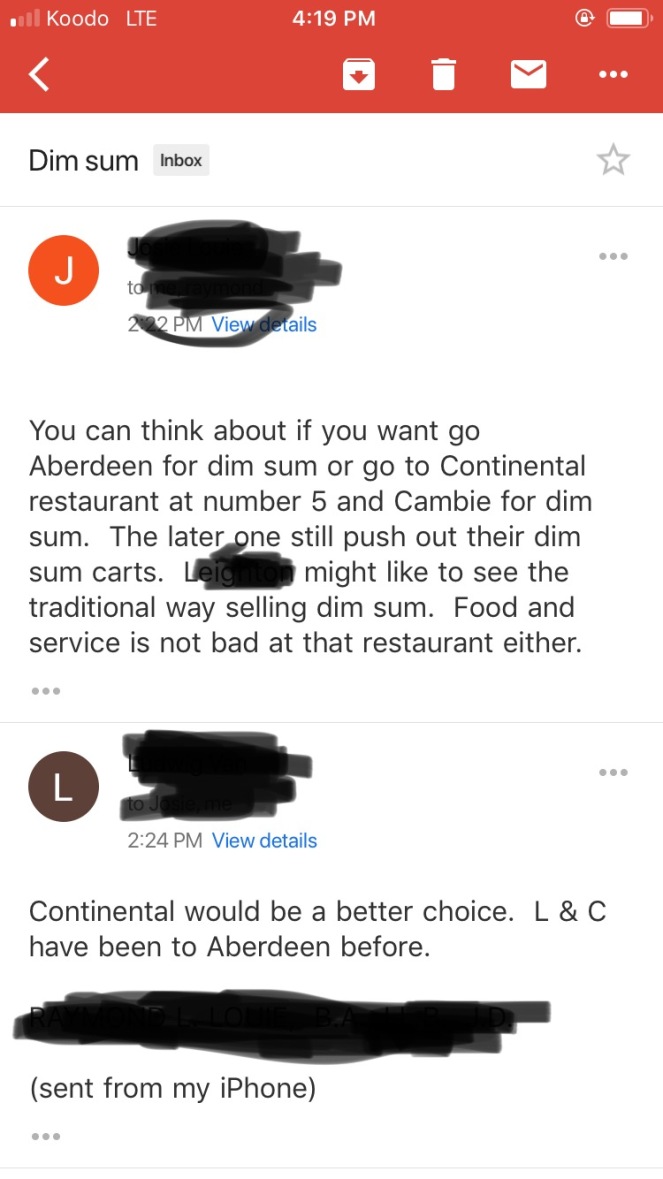 I told my mother that we were taking her out for dim sum, so she refused to order her usual feast. She says it’s rude to order so much when someone else is treating. She did request we order Ludwig’s favourite dish – Mixed Seafood E-Fu Noodles ($23.80). 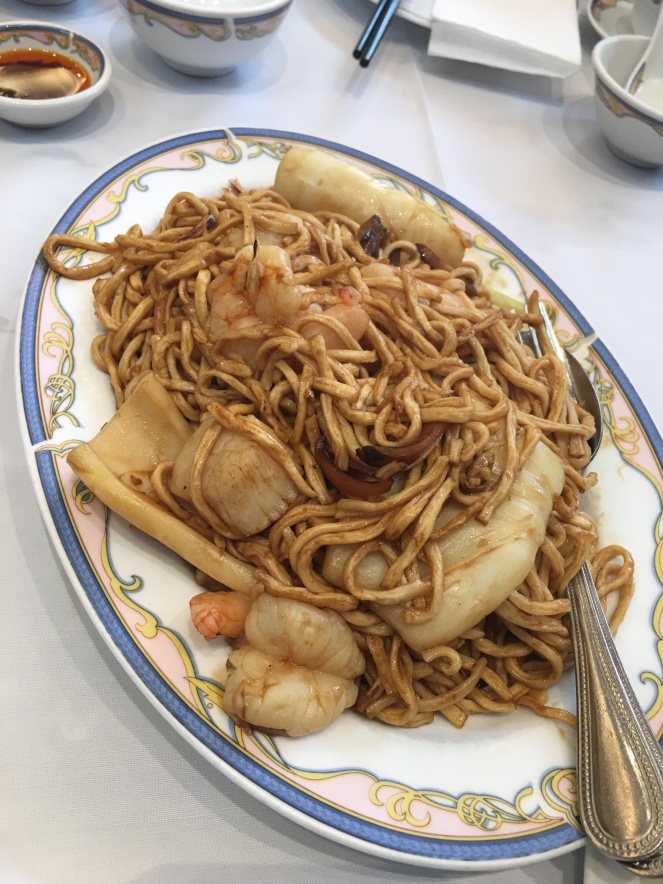 L liked the spongy texture of the noodles and the sweet, savoury sauce. Ludwig mentioned that unlike other restaurants, Fisherman’s Terrace gives generous amounts of large pieces seafood. 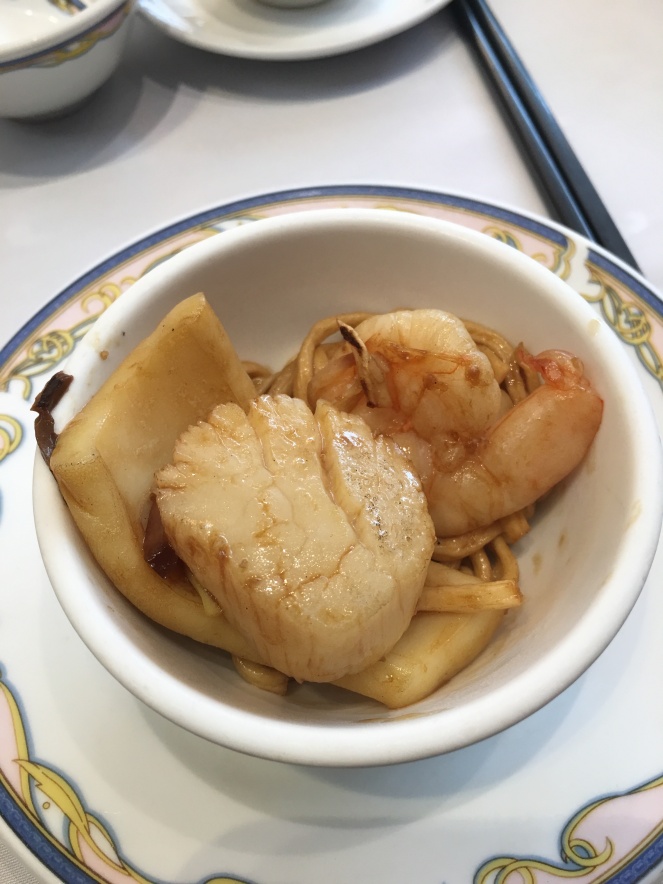 The scallops were meaty and not fishy. The squid was cut into large pieces, the texture was soft and satiny. The jumbo shrimp had a delectable crunch to it. I added chili oil as I thought the seafood needed extra flavour. 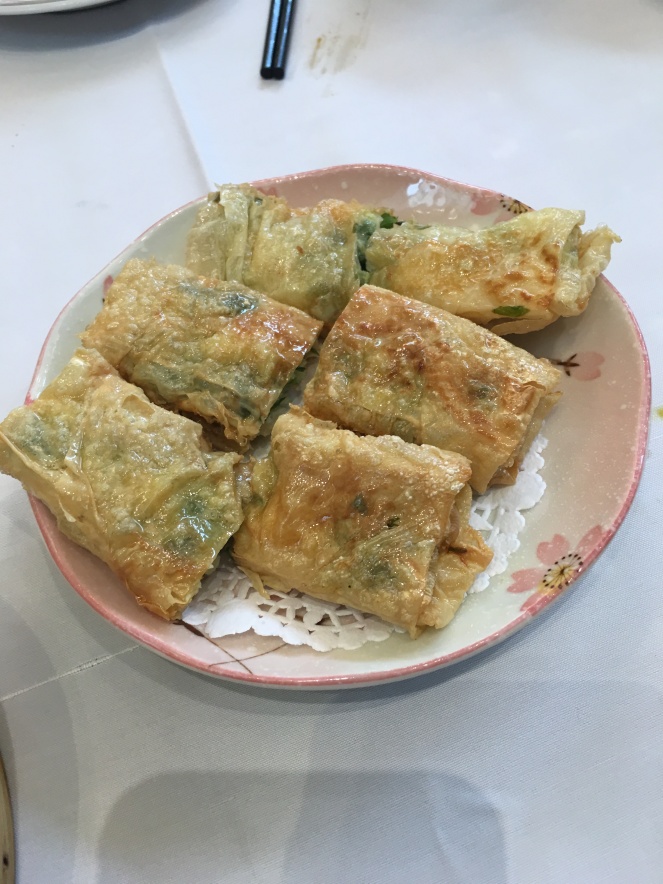 Boss Lady approved of the Tofu Roll ($5.95). The fried tofu casing was crispy and light. The pea tips were noticeably vibrant and flavourful. 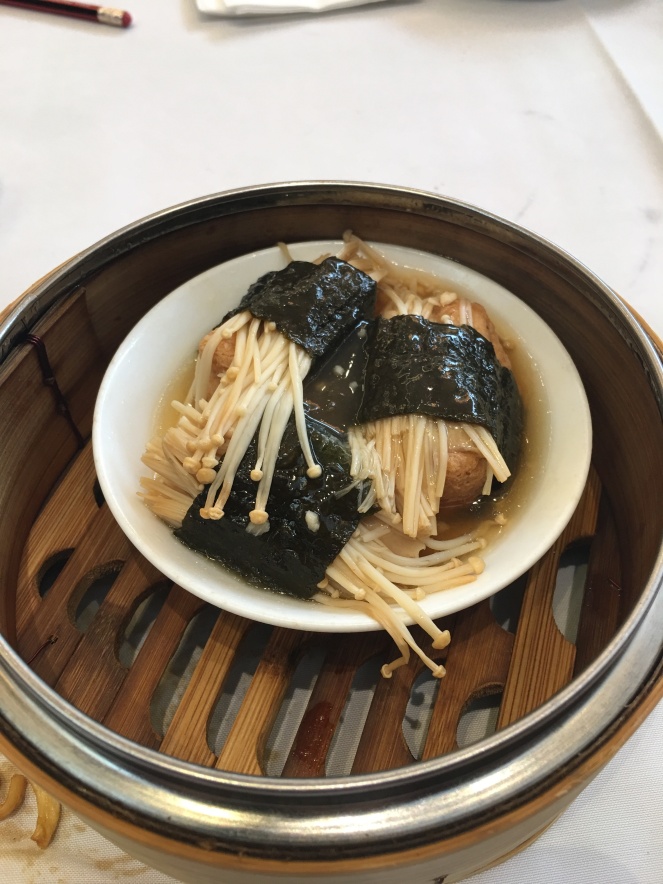 I ordered the Seaweed with Mushrooms and Tofu ($5.95) specifically for Ludwig. He says he’s a vegetarian but he eats seafood and occasionally, some meat. This time, he was serious. He thought the mushroom dish had a scallop in it and he dropped it like a hot potato on my plate. When we finally convinced him the offending ingredient was a vegetable, he took it back and ate it. 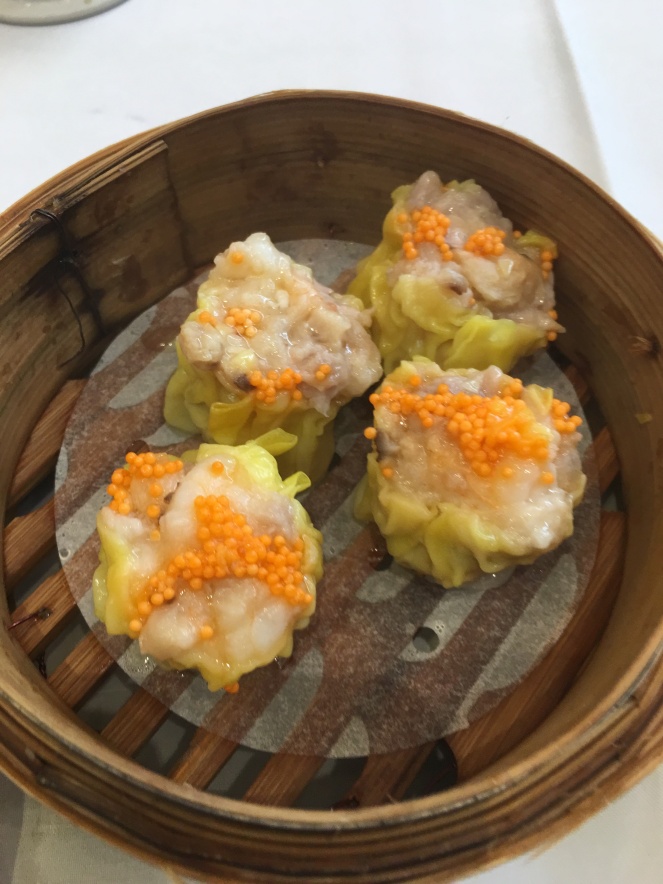 The Sui Mai ($5.95) was not worth the calories. It just tasted just like a plain old meatball, and the tobiko was over-steamed. L liked the sui mai and said he enjoyed it. 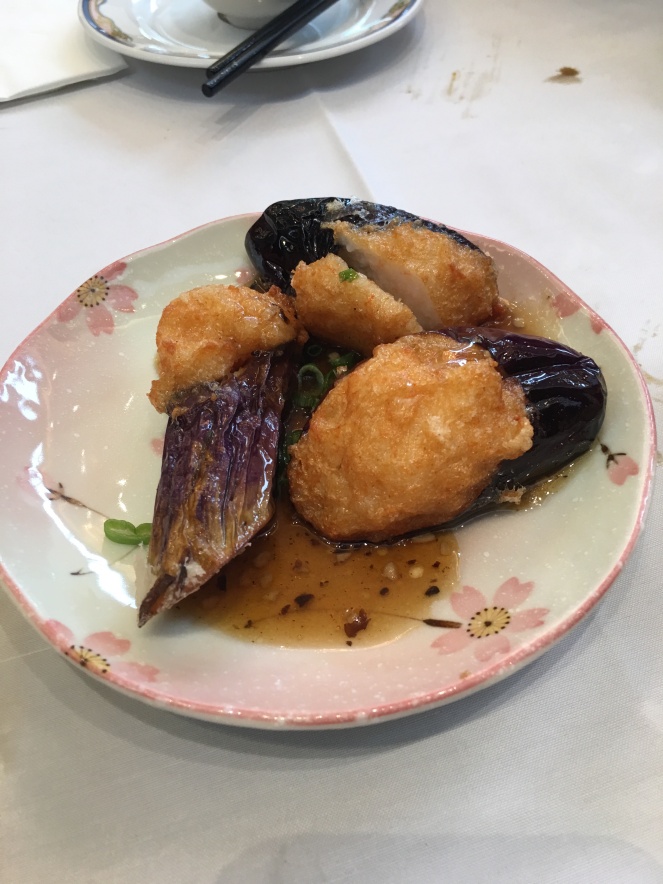 Boss Lady enjoyed the Shrimp Stuffed Eggplant ($5.60). She said the eggplant was fresh. I thought the sauce could have used a little salt. 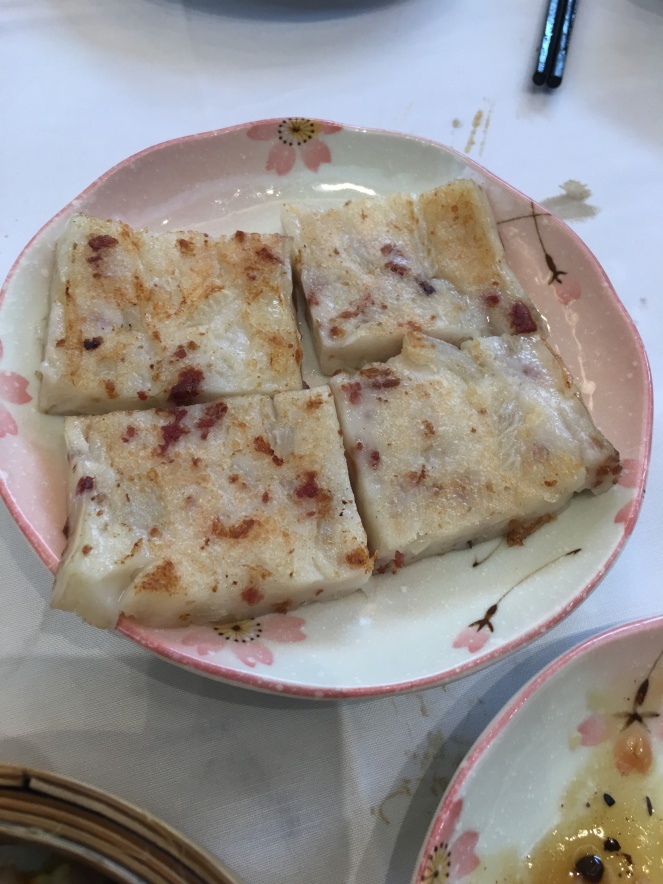 The Pan-Fried Turnip Cake ($5.95) was thinner than I’m use to. The pieces of turnip were juicy. I used plenty of Chinese mustard and hot sauce to liven the dish. 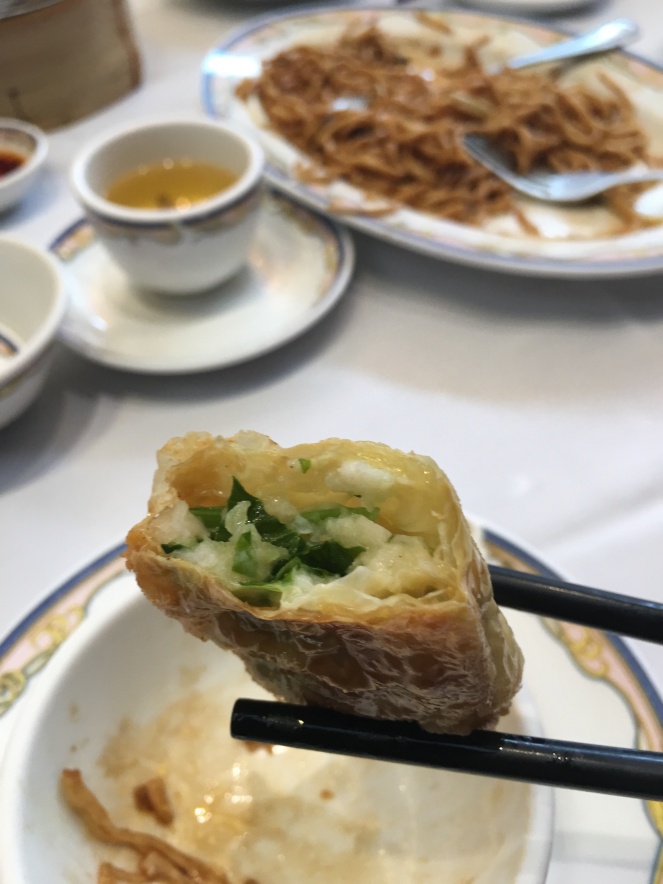 Our server Kitty was exceptional. At one point during our meal, Ludwig’s hand unexpectedly shook. The noodles he was lifting dropped all over the table. I was so shocked I didn’t immediately respond. Kitty walked over and graciously joked that if my father wanted her to serve, he just had to ask. She quickly served him fresh noodles and kindly cleaned up the mess. 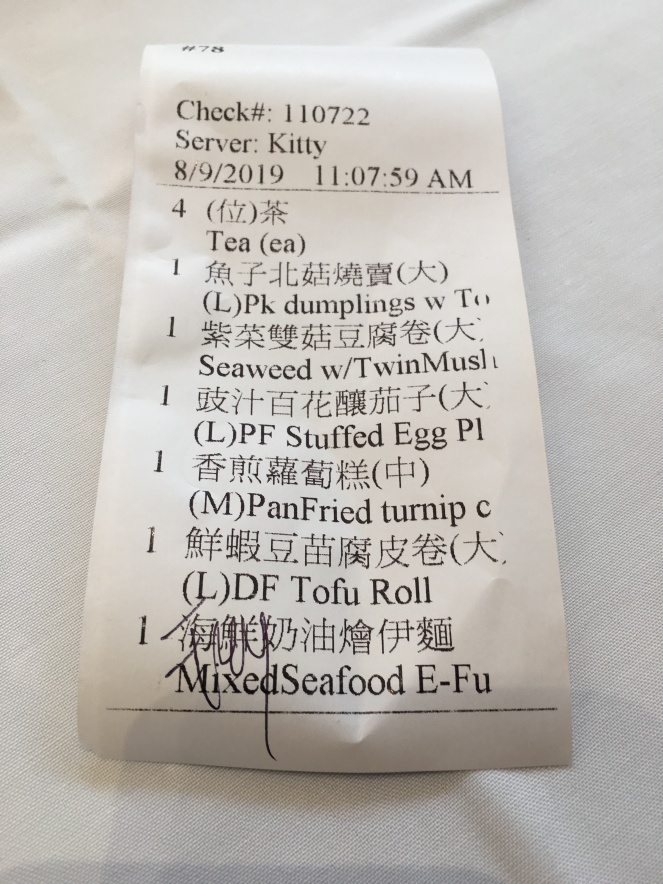 After our meal, we walked over to Ludwig’s crepe place. Unfortunately, it shut down and in its place was a pretzel kiosk. Poor Ludwig looked completely disoriented. He asked the young lady at the till if she could make him a crepe. I looked at the all pretzel menu and gently told him that this place only sold pretzels. The lady appeared just as confused as my father and looked to me for help when he asked again for a crepe. I took Ludwig’s arm and told him we would go somewhere else for dessert.

Despite the crepe catastrophe, this was a family success with minimum drama! Unfortunately, our next dim sum adventure did not end so well. To be continued.