L gets annoyed when I use Yelp to find a restaurant. He said the restaurants I find on Yelp are good, but tailored to tourists. I agree with him, but the alternative are restaurants that do not want foreigners. I’ve found a number of restaurants catering to locals that turned us away. Plus, we are foreigners. I can’t even string together a coherent sentence. I found Tempura Tendon Tenya via Yelp, but this one is a winner. For this post, let’s listen to Shonen Knife’s “Top of the World“.

We were walking around Ueno Station when I opened up my Yelp app and saw the pictures of Tempura Tendon Tenya. I ignored L rolling his eyes and navigated to the restaurant. We were seated right away. I noticed all the customers were old men. Always a promising sign.

We were given cold cups of tea. I noticed there was complimentary hot tea at a self-serve countertop. We went through the menu to view variations of tempura on rice and soba noodles. We picked the easiest and best value option – mixed tendon on rice for only 790 Yen.

The tempura is made by a machine. We waited about ten minutes for our bowls to arrive. Each bowl came with two shrimp, eel, fish, two green beans, seaweed, and a lemon peel. I found the portion quite generous, particularly for the price.

Despite the bath of sweet tempura sauce, the generously battered seafood and vegetables remained crunchy and delicate. Oh god – this was good stuff. The tempura lemon peel was refreshing and decadent. The eel tasted like an oyster.

The shrimp was crunchy and toothsome. The seaweed was incredibly delicious – there was a layer on top of the seaweed that gave it some bite. The rice was good – firm and sticky. Next time I come, I want to order all shrimp tempura and seaweed.

There was an old man who made a loud production when he went to pay for his meal. The cook and staff come out of the kitchen to see who was making the commotion.  L and I were quite shocked because no one in Japan makes a scene unless their drunk. He was yelling and it sounded like he was complaining about the food. The female server said yes, yes, so sorry a few times in a quiet soothing voice. Then she asked him to settle his bill.

I spoke to TJ about our meal at Tendon Tenya. She informed us that Tenya is a chain restaurant and one of her favourite places for tendon. I told her about the scene the customer made and she concurred that it was very unJapanese to make a public spectacle like that. She mentioned that people with mental disorders are often not diagnosed in Japan, implying that the man’s behaviour was abnormal.

In the evenings, most of our group would leave Ikebukuro for the busier spots, such as Shibuya (entertainment district that appeals to the youngsters), Shinjuku (the busiest train station with the largest red light district) and Harajuku (know for street fashion, but I didn’t see anything but tourists).  L and I preferred hanging around Ikebukuro, where it was easier to walk around, weaving in and out the quaint little nooks in the city. I much rather get to know a neighbourhood really well rather than seeing a little of a lot.

Going out to drink in Tokyo is more difficult and expensive compared to Calgary. Most bars fit ten people or so, so it’s not easy to get a seat for two during prime time. Smoking is allowed, so L will throw a fit and make me leave if our table is next to smokers. There’s usually a seating fee, even for the hole-in-the-wall bars. Tiny sleeves of average beers cost 800 Yen. Below average wines start at 1000 Yen.  I’m not into drinking sub par drinks at a premium, which is why I chose to drink before I went out in the evenings.

TJ likes to describes herself as a thorough researcher, which is why she needed to buy every single sparkling sake she could find. Last year, she was really into plum wine, which I find much too sweet. Due to her deep love for knowledge, I’ve sampled 15 different sparkling sakes.

I prefer “cloudy sparkling sake” over sparkling sake. Regular sparkling sake is sweet and in many cases, reminds me a delicious, one-dimensional soda. Cloudy sparkling sake is usually higher in alcohol percentage (15%) and taste more like regular sake. My favourite sparkling sakes are Chokaisan and Sparkling 39. One of the better sakes I tried is Dassai 39. I wanted to bring home a sake that was recommended to me (6000 Yen), but I was afraid it might break in my luggage and I didn’t know if it was worth the risk. I plan to buy a bottle to try at the beginning of the trip to ensure it is luggage worthy.

If you want to eat and drink at an izakaya (Japanese pub), it can get pricey. The exception being places like Torikizoku, a chain restaurant known for selling all its dishes and alcoholic beverages for a mere 300 Yen (plus taxes). L doesn’t like this place too much, but we’ll come after we get rejected by the better izakayas that only cater to locals. 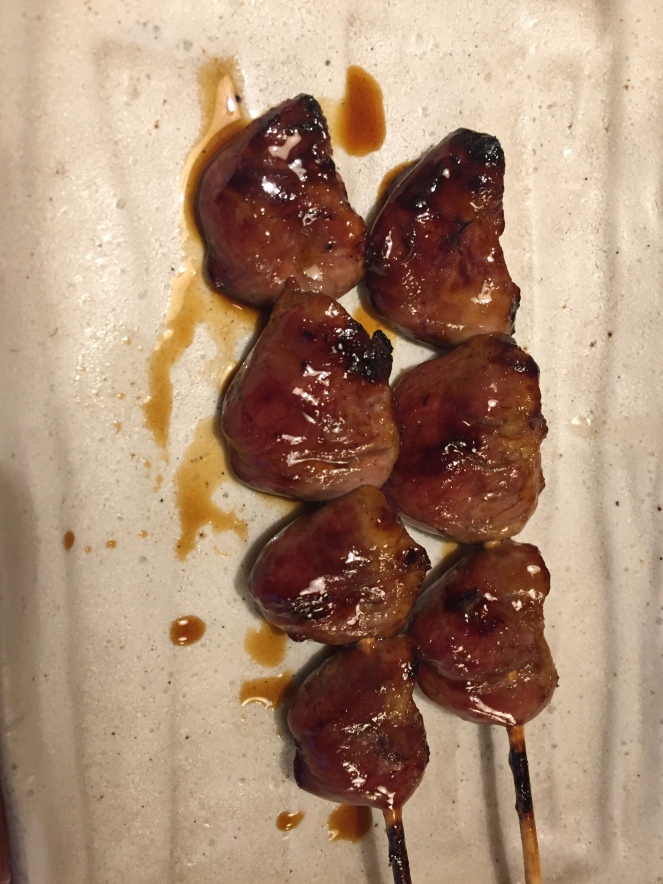 I’ve found the food inconsistent – sometimes it’s quite tasty and other times I find it lacklustre. I have a soft spot for this place because it was the first izakaya I went to and the staff are nice and accommodating to foreigners. For the price, I don’t care if some dishes aren’t that great.

You order from an iPad. There is an option for English too. The cabbage is all-you-can-eat. The cabbage is just roughly chopped up and tossed with soy sauce. To me, it tastes a bit like plastic. The ramen and rice bowls are below average. The best thing to get here are the skewers. 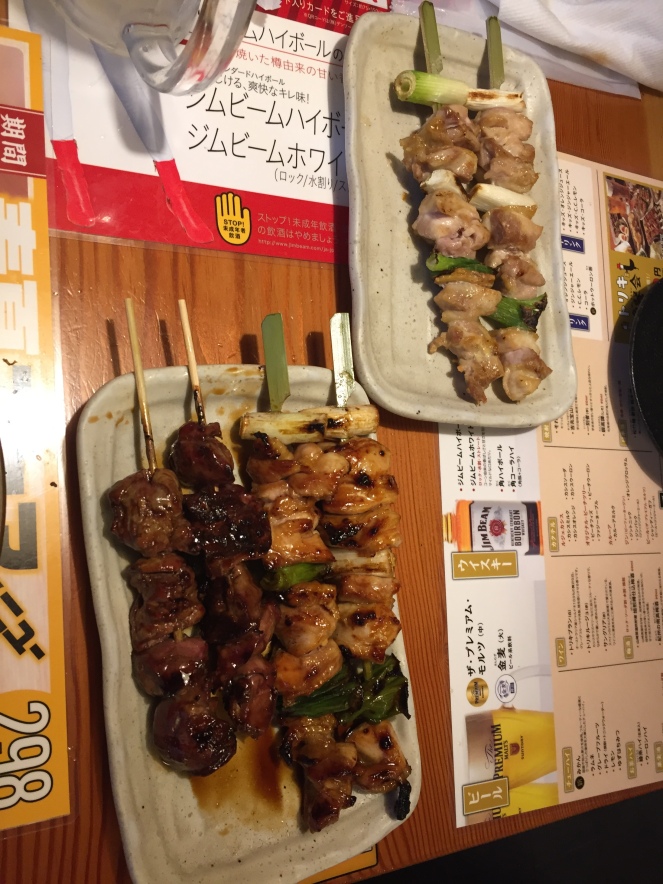 L and I accidentally ordered liver. This version was gross – the texture was gritty and tasted  like clotted blood. Generally, I preferred the yakitori with sauce rather than just salt and pepper. The karrage is okay, though very dry. The deep-fried chicken knees were my favourite – little crunchy, munchy nubs. The meat patty skewers with cheese were also good. 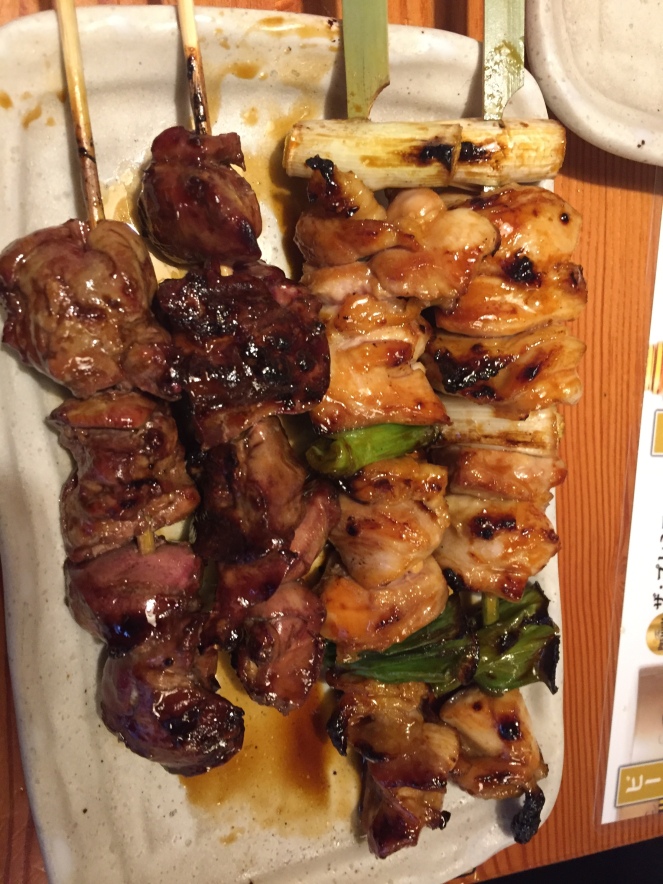 There’s a low quality beer in a big mug and a slighter better beer in a sleeve, both the same price. L said the bigger sized beer taste like piss. I didn’t like any of the alcohol served here. You do pay for what you get. We can eat and drink here for about 20 US. 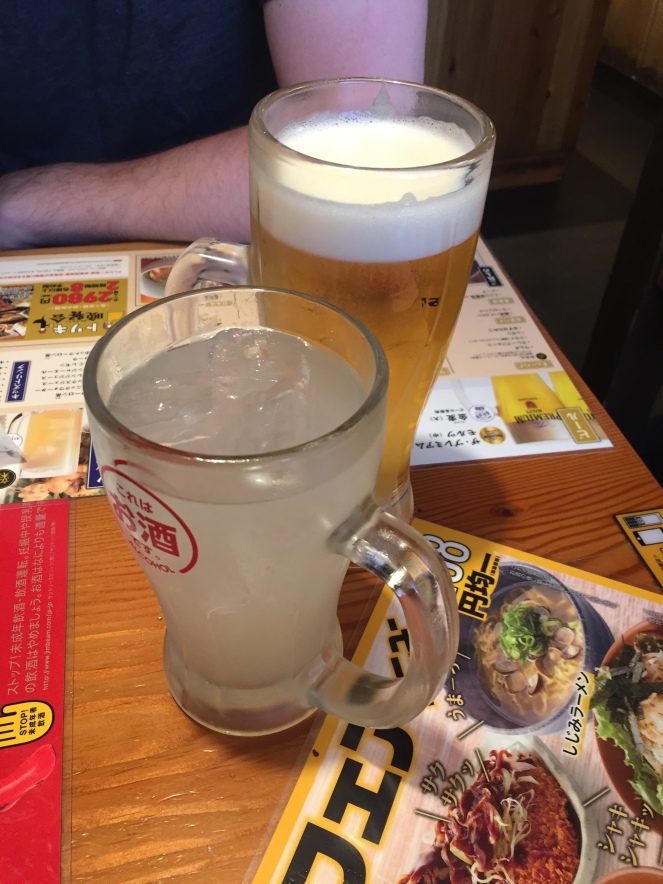 Seeing as how we’ve mastered Ikebukuro this year, next year I’d concentrate in a neighbouring areas. In Tokyo, we take the Yamanote Line – which loops around central Tokyo. Places we haven’t explored deeply include: Shin-Okubo  (Tokyo’s Korea town), Shinagawa/Gotanda (high concentration of izakayas), Takadanobaba (college neighborhood that’s home to Waseda University) and Yurakucho (restaurants under the tracks of the Yamanote line).

Back in Japan! Due to L’s work, we spend three weeks in Japan. In Tokyo, our group stayed in Ikebukuro, a lower income area known for a surplus of girlie bars. There are a few seedy streets, but other than that, Ikebukuro does the trick.  For this post, let’s listen to Plastic Love by Takeuchi Mariya.

For breakfast, L always goes to Sakura Café, which is part of our hotel – Sakura Ikebukuro. The 24 hour cafe has a large outdoor patio, a rarity in Tokyo. Last year, the cafe was quiet and filled with mostly tourists. This year, the cafe was packed with locals and tourists. In the previous year, the staff allowed our group to meet inside the cafe.

On our first morning in Tokyo, I knew our group was in trouble. A bunch of them came in and ate their store bought food inside the cafe and threw away their plastic bag and containers in the cafe’s bins. Japan is very strict regarding where you dispose your garbage. The appropriate thing would have been to keep your garbage with you and dispose of it in our hotel room or the hotel’s garbage bins. 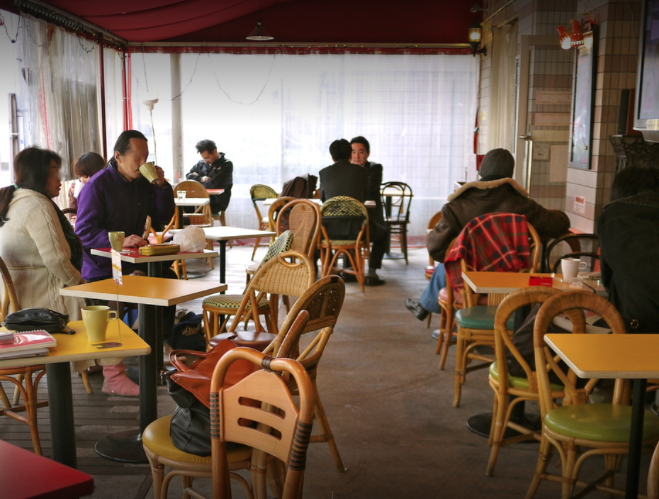 L likes the breakfast at Sakura Cafe. For 350 Yen, you get all-you-can-eat white toast, Asian soup, coffee and tea. L ate here every day because he prefers a light breakfast and he could work while the group could find him if they had questions. I joined him a few times. I would get there early in the morning and drink three tiny cups of soup. I always scooped up the goodies on the bottom of the pot (bits of meat, seafood, vegetables). By the time I got my third cup, the pot of soup was mostly broth. I thought it was funny but when I told L, I could see he disapproved. I didn’t feel bad that other customers only got broth. It’s not my fault the cafe skimps on the good stuff.

The coffee was weak and the toast reminded me of Cobb’s white bread. A flavourless margarine and three types of jam were offered for the toast. I preferred picking up oden from 7/11 and then buying a coffee at Sakura Cafe so I could sit with L. 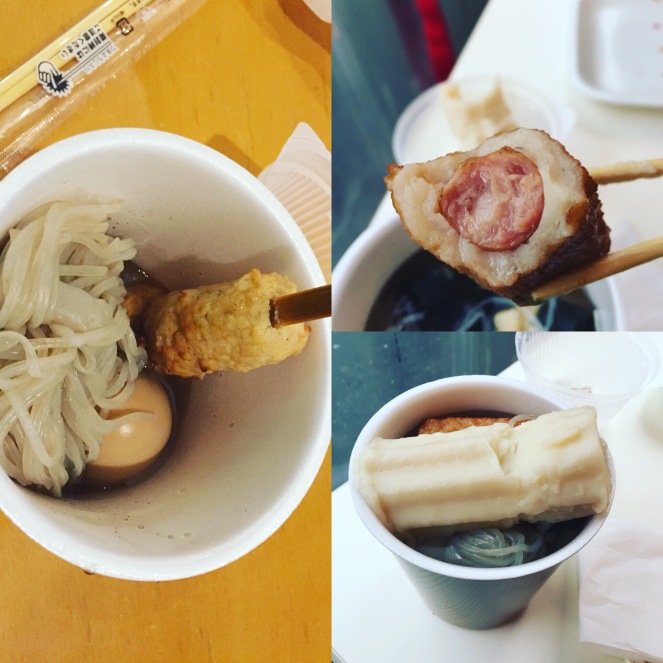 Most convenience stores don’t sell oden in the spring or summer season. However, the 7/11 by our hotel did. I would eat three to four pieces – usually an egg, daikon, kinchaku, wiener-maki or shirataki.  Each piece ranges from 80 to 120 Yen. The broth was light, salty and savoury, made from a combination of soy and dashi. This simple stew looks strange but it’s tasty and warms you up first thing in the morning or late at night.

Our hotel gave us a coupon for a free glass of wine or sake with the purchase of an entree. After a long day, TJ told us she wanted to grab a bite for dinner.  I knew from past experiences that when she’s hungry, she doesn’t want to wait for a table or to take the time to look around for a good restaurant. TJ only cares about the three Cs – convenience, cheapness and copious portions. I suggested we eat at Sakura Cafe even though I knew the food was the equivalent of Calgary’s Chili’s.  The wine taste like apple juice so I requested some ice cubes to enhance the flavour.

We all ordered the cafe’s specialty – Hamburger Gratin (1, 290 Yen). Basically, it’s a hamburger in a bun, covered in a creamy, cheesy sauce and baked until it’s a hot molten ball. I ordered a side of fries (490 Yen) to mop up the sauce and scraped most of the bun under the cast iron pan on top of my plate. L made a face because of the mess I was making. I told him I’d put the discarded bun back on the pan after I was finished dipping my fries with the sauce. I needed to move the bun otherwise the bread would soak up all the sauce. He pretended he didn’t know what I was talking about. After eight years, I can read L like an open book.

Highlight – my newfound love for oden. It’s a low calorie and a guilt-free option.

Lowlight – getting reprimanded for our group’s behaviour. Toto, I’ve a feeling we’re not in Kansas anymore.