Québécois and I have been friends ever since she and her husband moved next door to us in 2014.  On Friday night, she treated me to dinner at Raw Bar. I haven’t been to Raw Bar since Duncan Ly was the executive chef. For this post, let’s listen to “Date Night” by Father John Misty.

On Fridays, almost all the wines are half price. What a steal! I can’t think of any other restaurant in Calgary that offers half price wine on Friday. Select appetizers are half price until 6:00 p.m. and dollar oysters are served until 7:00 p.m.

Our first bottle of the night was Sirius Bordeaux Blanc 2017 ($49, HH $24.50). When we first took a sip, we thought the wine was acidic. But after the wine had a chance to breathe, the flavour was more tropical and light. I enjoyed this bottle.

We started with a round of oysters (HH $1.00). The oysters were small and briny. I ate one oyster that tasted bitter, so I spat it out. I didn’t get sick, so no hard feelings.

Our server recommended the Fried Caulilini ($10, HH $5). Caulilini is a variety of cauliflower. The batter was doughy in some pieces.

The Grilled Shishito peppers ($12, HH $6) were crunchy. I enjoyed the curry aioli and the crispy bits of puffed rice. Québécois took a bite of a pepper and announced it was too spicy. When I bragged that I can handle my spice, she dared me to eat her pepper. I popped the shishito in my mouth and immediately my face flushed red. When Québécois saw me chug my glass of water, she regretted telling me to eat it. I said no worries, as spicy food speeds up my metabolism.

Québécois ordered a second bottle of wine – Michel Gassier Viognier France, 2018 ($46, HH $23). I really liked this bottle – the wine was dry with a floral aroma. I would order this bottle again.

Even though I just returned from Cabo, I wanted to try the Ahi Tuna Tacos ($16, HH $8). The tuna was tasty but oversauced. I had to pour some of the liquid out of the hard taro root shell before eating it. I thought I could taste kimchi in the sauce, even thought the menu described the sauce as a chili glaze.

My favourite dish was not on the happy hour menu –  Korean Beef Tartare ($16). The flavours of the chilled beef and sweetness from the Korean pear were spot on. I found the tartare refreshing and nicely seasoned. The rice chips were so addictingly delicious, Québécois asked for another serving for me. The chips remind me of a fresher, tastier version of shrimp crackers you get with roast chicken at a Chinese banquet dinner. 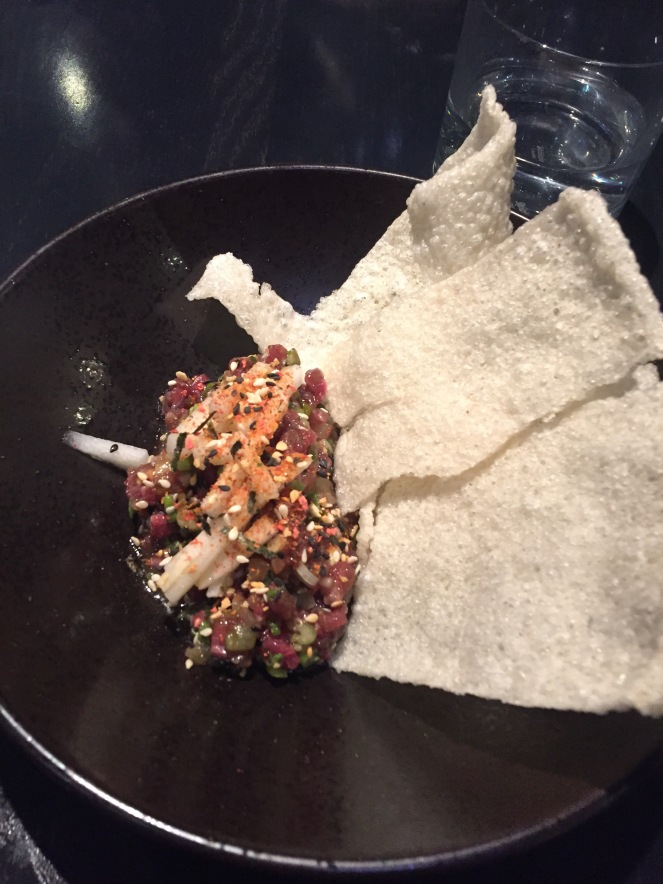 Québécois needed a sweet to finish the night. She ordered Homemade Bon Bons ($3.50). The chocolate was dark and the filling tasted like coconut.

Québécois wanted to end the night with a glass of bubbles. She insisted on getting another bottle because it was about the same price as ordering two flutes. She picked Famiglia Zonin ($45, HH $22.50), a fizzy and easy to drink prosecco. By this time, we could barely finish our prosecco. Québécois asked our server to cork our bottle.

If you haven’t been to Raw Bar, I’d recommend checking it out on a Friday night. Thank you Québécois for treating me to a merry night out with great wine and tasty bites. My treat next time.