I took L to Bar Von Der Fels to celebrate his good news. In light of the provincial election, let’s listen to something presidential –  Lady Gaga “Government Hooker“.

Though the bar is small, the seating feels more spacious than larger restaurants. I noticed that Bar Von Der Fels doesn’t jam its space with tables. I dislike it when restaurants pack the place so tight, it’s difficult for me to get up without exposing either my ass or crotch to the adjacent table. In New York, Kyoto and Tokyo, I found super tight quarters are the norm. 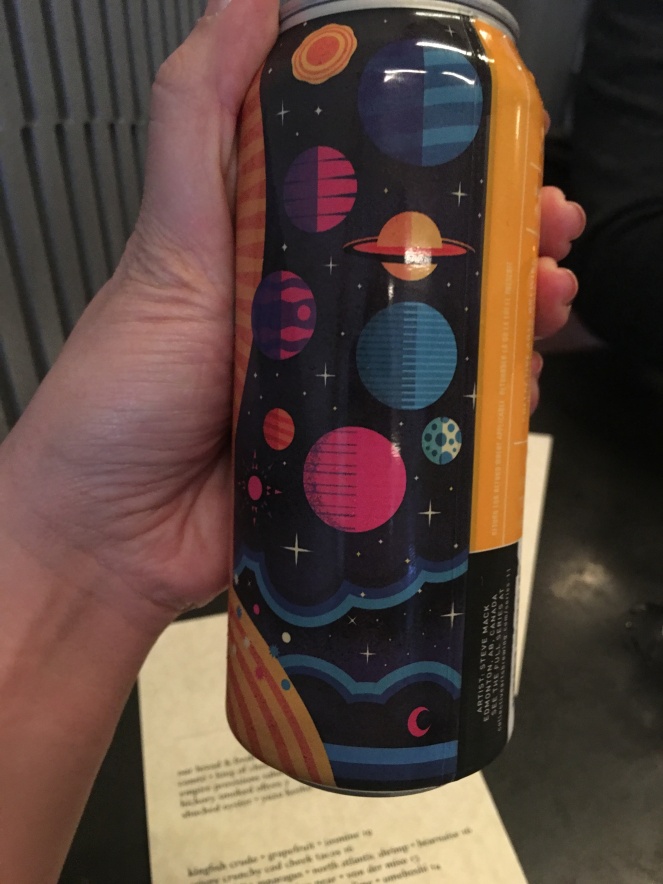 I told L to ask for a beer recommendation. The staff at Bar Von Der Fels know their booze. L decided on Collective Arts ‘ransack the universe’ India pale ale ($10). The ale reminded him of Philip’s Electric Unicorn but better because it was lighter and simpler.

I asked for a recommendation for a full-bodied wine. I tried three wines before I settled on an Italian red – Domodimonti Il Messia 2015 ($16). I found the wine plummy, silky, and light. Nothing in particular jumped out – it was just a well-balanced wine.

L’s new favourite dish in Calgary is the Bread and Fresh Cheese ($7). The warm bread and cool cheese complimented each other. The buns were soft, heavy and fluffy. The cheese was light and cold, with a texture similar to whipped cream.

We tried what is considered by some to be the finest cheese in the world – King of Cheeses ($15). Comte is made from unpasteurized cow’s milk. The cheese has a nutty flavour and sweet aftertaste. Personally, I much preferred the fresh cheese over the prized comte.

The Empire Provisions Salumi and Prosciutto ($9) was stunningly delicious. L and I couldn’t believe what we were tasting. Both meats were so flavourful. The thin slices melted from the heat of my finger. I’m a die hard Peasant Cheese customer, but after sampling these two meats, I need to shop at Empire Provisons. 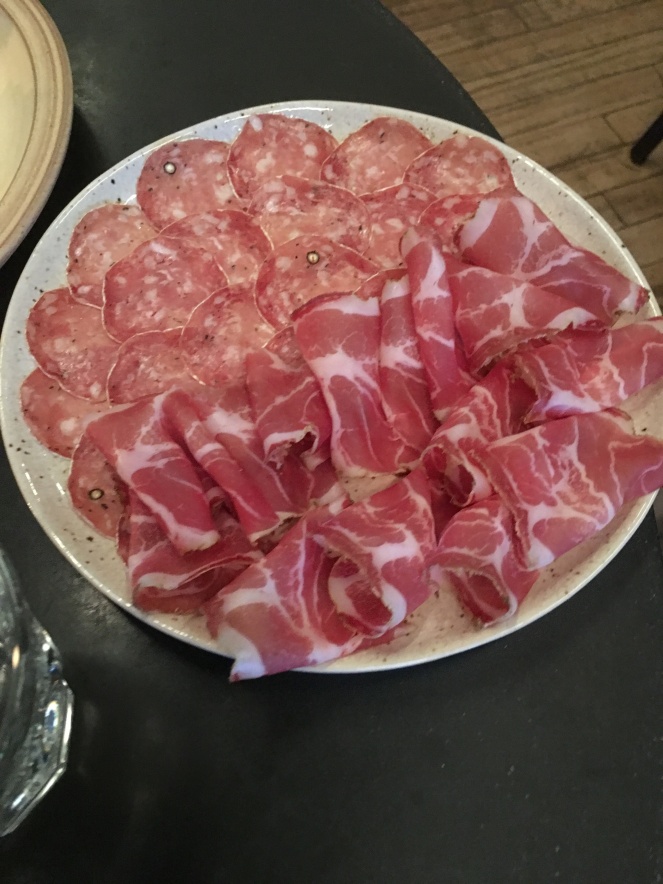 L ordered a can of OT Brewing Company’s ‘flagstick’ beer ($7). The ale was light and refreshing with tiny bubbles. This is the sort of beer that that you could crush all day long on a patio. L enjoyed it so much, he bought some the next day from Coop Liquor Store. 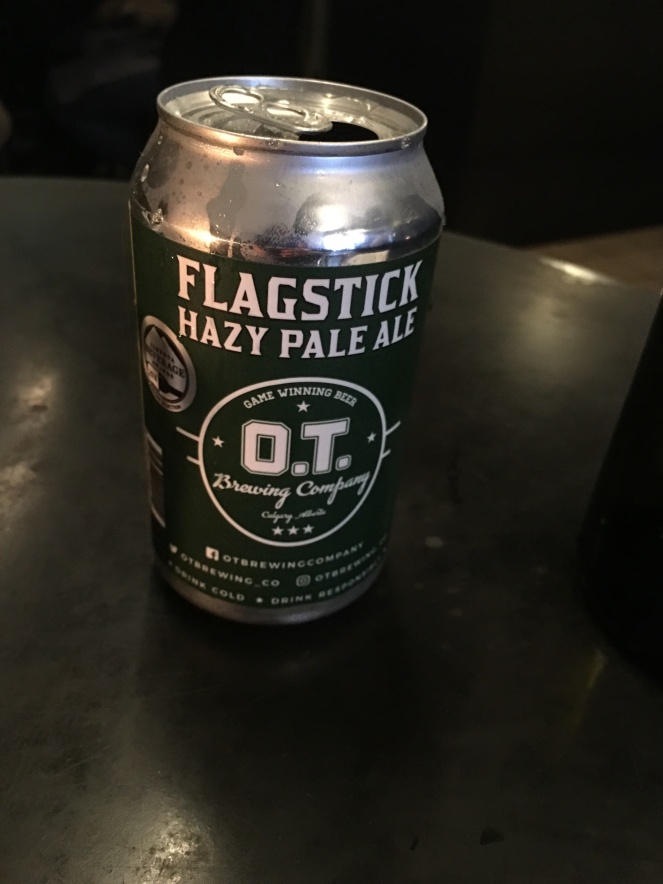 I sampled two more wines before I settled on a French red –  Jean-Marc Burgaud Beaujolais Villages Les Vignes de Lantignie 2017 ($14). I found this wine interesting and I liked the juicy, mellow finish.

L and I thought the Brussels Sprouts ($13) acted almost like a palate cleanser. The salad was light and sweet like a coleslaw, filled with soft slices of pear and crunchy bits of celery. The toasted pine nuts added an earthiness to the salad. 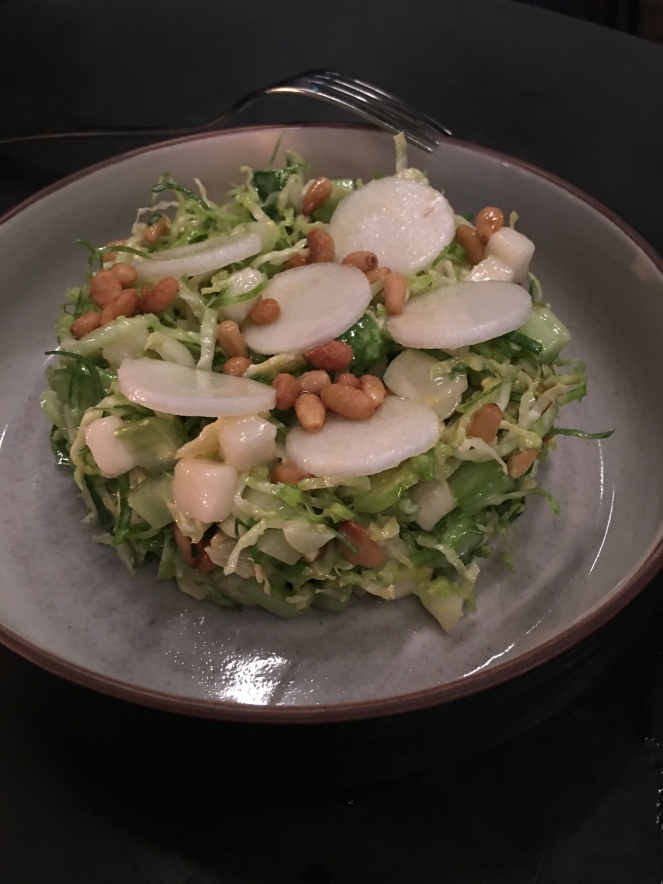 Our last dish of the night was unreal. I could taste the BBQ flavour in the Smoked Bison Tartare ($22).  The tartare was so fresh it reminded me of sashimi.

I savoured each potato chip. I don’t know what sort of oil was used, but it made the chip smell and taste incredible. When I held the chip against the candle, it looked like a piece of stained glass. 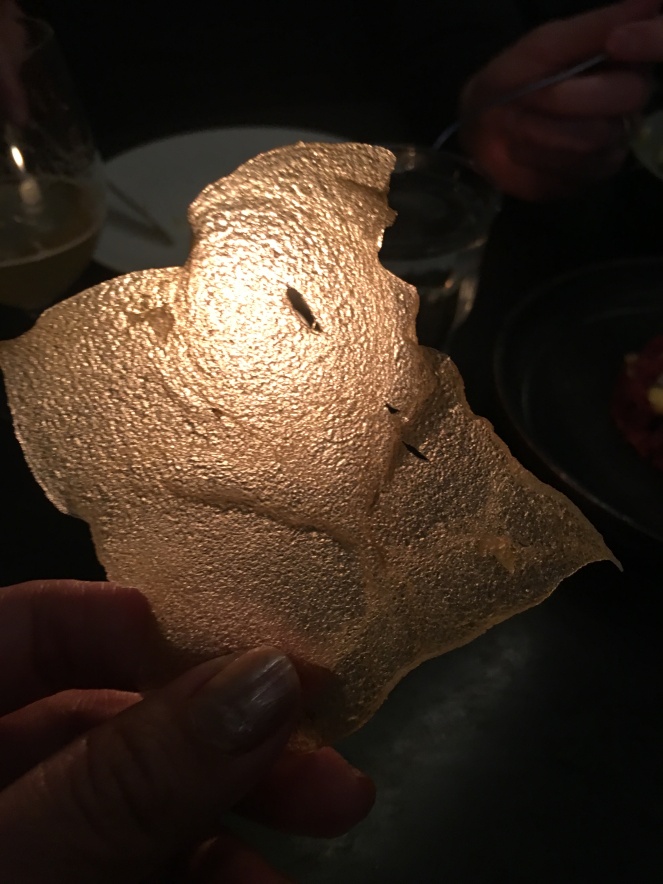 I was enjoyed the evening so much, I indulged in one more glass – Roc’ Ambulle ($16). I like my bubbles and I like them French. I found this glass refreshing, a touch tart and not sweet. 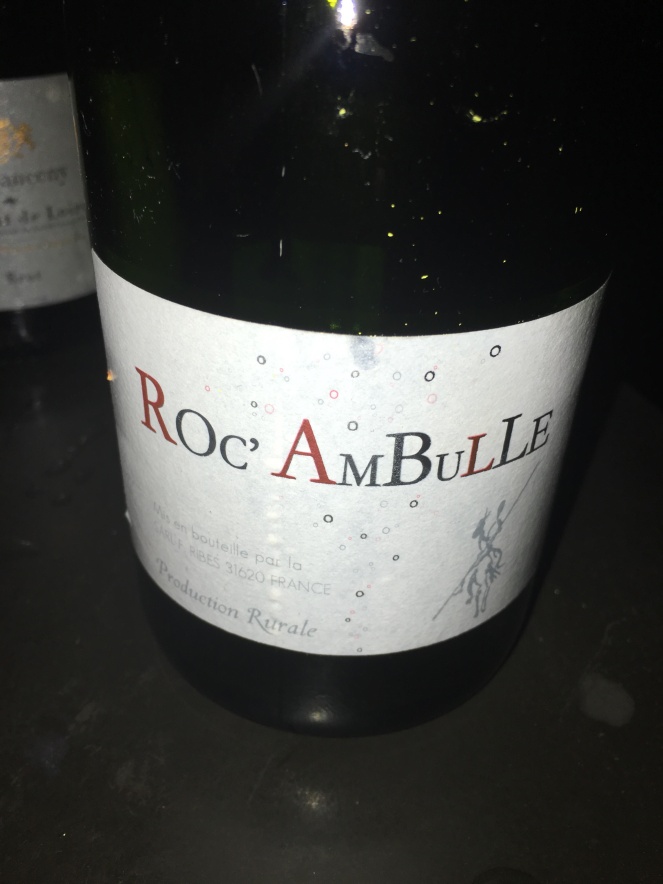 The Michelin guide covers 25 countries but not Canada. I told L that I have been to two Michelin star restaurants (Cafe China and Tim Ho Won), one Bib Gourmand restaurant (Kagari, Tokyo) and one Michelin Plate restaurant (Buvette, New York). I think if those restaurants made it on the list, so should Bar Von Der Fels and Shokunin.