L and I found one of our best meals by accident. Initially, I found a yakitori bar in Pontocho by Kamogawa River. We entered the restaurant and a server confirmed there were two seats available. By the entrance, there was a table of salary men smoking. L was so irritated by the smoke he didn’t even bow and say sorry in Japanese to the hostess before abruptly leaving. L told me we would find somewhere better. I didn’t believe him and I threw a bitch fit (BF) a la White Chicks. After walking around for 15 minutes, I told L to follow the couple ahead of us. For this post, let’s listen to Bitch by Meredith Brooks.

I could sense this couple knew where they were going. I felt that they knew we were following them when we entered the elevator and didn’t press any button. They looked nervously at each other and then the gentleman turned around to say something to me in Japanese. When the doors opened, we discovered we were at an all-you-can-eat Korean BBQ Restaurant – Nikuya no Daidokoro.

For about $27 US, we could eat an array of chicken, pork, one type of beef, vegetables and a huge salad bar with soup and dessert. For an extra $3 US, we enjoyed unlimited draft beer. The quality of the meats and vegetables were very good. Far superior to the Korean buffets in Vancouver and Calgary.

L ordered all the meats and took care of grilling all the food. We didn’t stink too bad of meat after we left, because the fan did a great job of sucking up all the smoke.

We tried most of the meats on the menu. The only one I didn’t like was Pope’s Nose, as it was too fatty and hard. The wiener was particularly delicious – once you crunched through the casing, it popped with sausage juice.

I ate several plates of banchan – Korean side dishes. Soybean sprouts, cold spinach, watercress tofu salad, cabbage and soybean paste, and edamame. I put the edamame on the BBQ and then sprinkled it with salt. I realized that everyone else eats them cold when the servers and other customers would give me a double take. 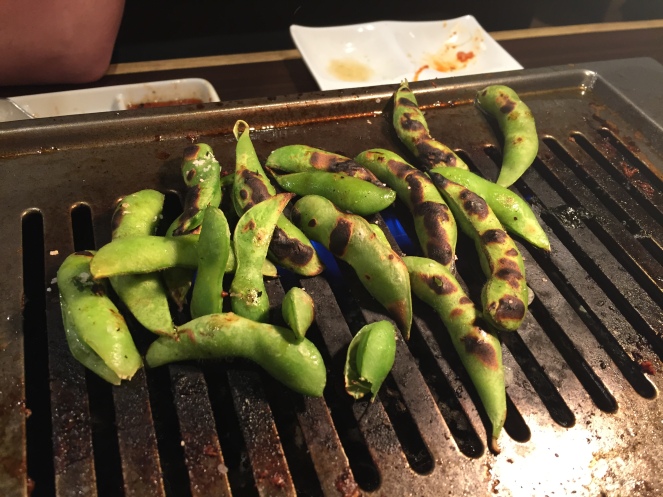 There aren’t a whole lot of vegetables and fruits readily available in Kyoto, at least not in our area. So I filled up on vegetables. I grilled peppers, mushrooms, onions, cabbage, eggplant and shiso peppers. There were also a ton of sauces and salts to choose from.

I felt remorse for my BF earlier so I tried to pay for supper. L wouldn’t let me which made me feel even worse. I liked this place so much, I insisted on taking him out later on in the week and splurging for the wagyu beef. When we returned on a Saturday night without reservations, our server informed us that they were booked up for the next two hours. I must have looked crestfallen because the server looked at me pityingly.  In any case, L and I will be back next year.