Jaime and I made plans for dinner on Monday night. I’ve been meaning to go to Donna Mac ever since Soup and Ottawa recommended it. Jaime also hasn’t been to Donna Mac. We looked up the menu and saw some dishes that appealed to us, like the porcini and gouda crullers, fried cauliflower, and fried oysters.

I’ve been on an anti-house wine campaign. I asked Jaime if we could duck into Bar Von Der Fels for a glass of wine before our dinner. For this post let’s listen to a song I heard playing that night – Sir Duke by Stevie Wonder.

We sat by the window. There was a man who secured his yellow bike right in front of us. During our meal, I saw two people come up and try unsuccessfully to steal his two-wheeler, and two other less sketchy people walked up to admire it. I’m not so sure what was so special about this vehicle to garner so much attention. 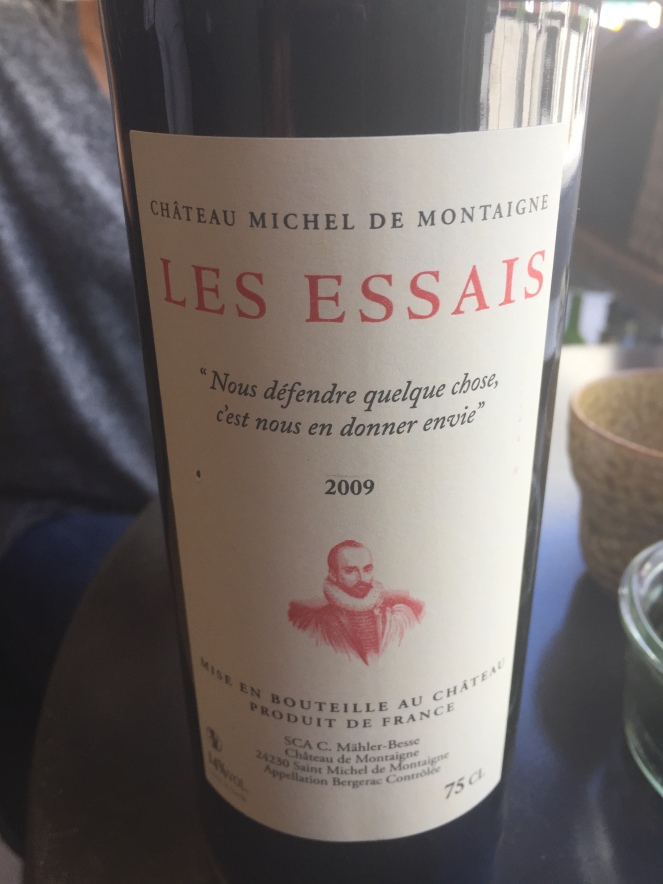 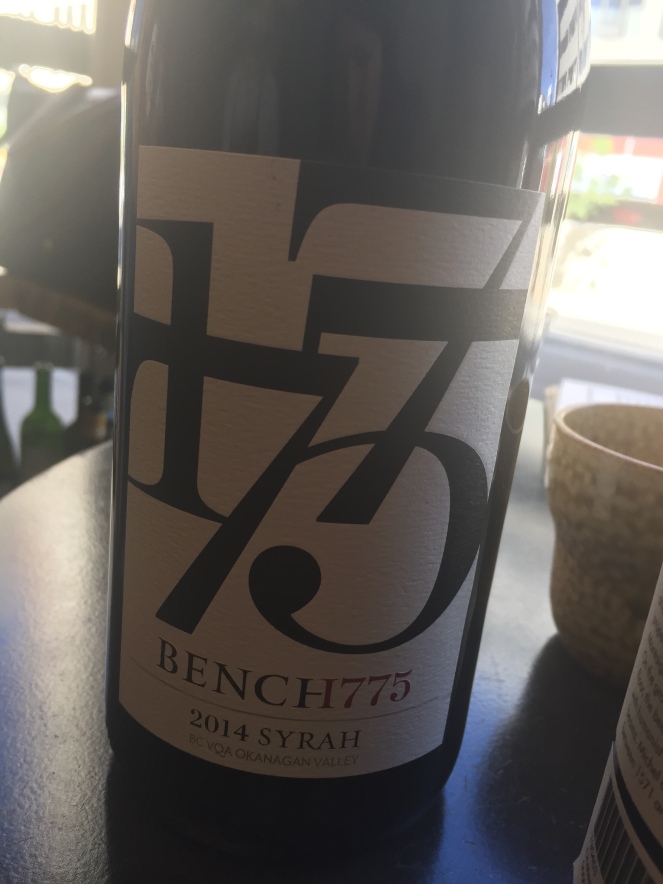 Jaime ordered Hickory Smoked Olives ($6.5). She’s really into olives. I liked the smokiness but I couldn’t eat too many of the olives because the flavour was quite strong. Jaime liked the olives so much she wanted to buy some to take back home. 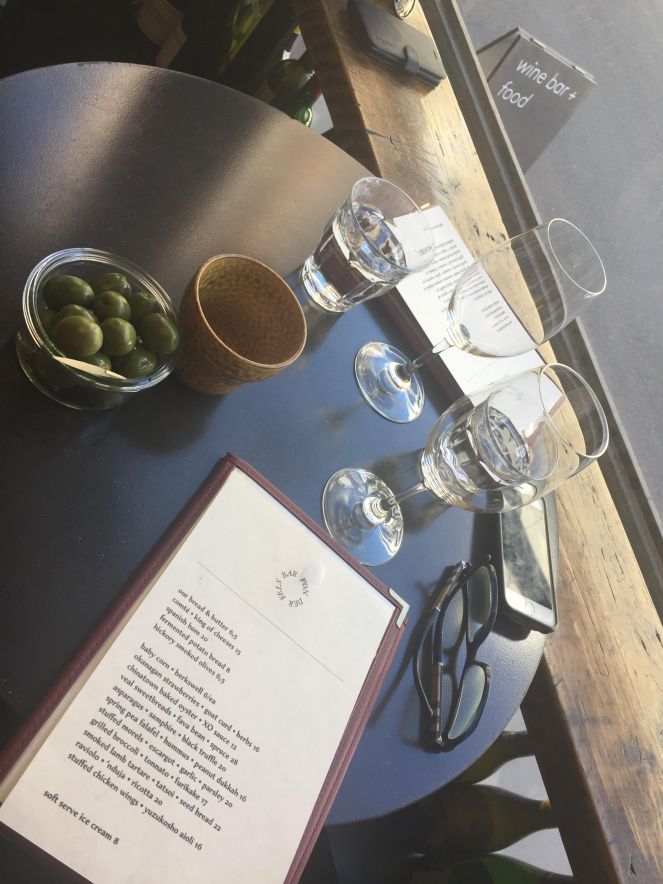 About this time, I realized I didn’t want to leave Bar Von Der Fels. Still traumatized by my experience at Bank and Baron and Kaya in Kyoto, I wanted to stay and enjoy more wine. I asked Jaime if we could cancelled our dinner reservations at Donna Mac and eat here instead. Jaime, being the agreeable, easy-going friend that she is, complied. She ordered Fermented Potato Bread ($8.00).

The potato bread is steamed to order and individually made for each customer. The bread was hot and soft, scrumptious like a crumpet. I smeared a generous amount of the butter on it. The butter tasted like clotted cream. We asked what was in the butter that made it taste that good. Bar Von Der Fels uses ramps.

I ordered the Chinatown Baked Oyster ($12). The large oyster tasted like the ocean. The oyster was so ridiculously fresh, I couldn’t believe I could get this in Calgary. The creamy sauce was spicy and it reminded me of shrimp and black bean chili oil I order from an acquaintance’s mother. 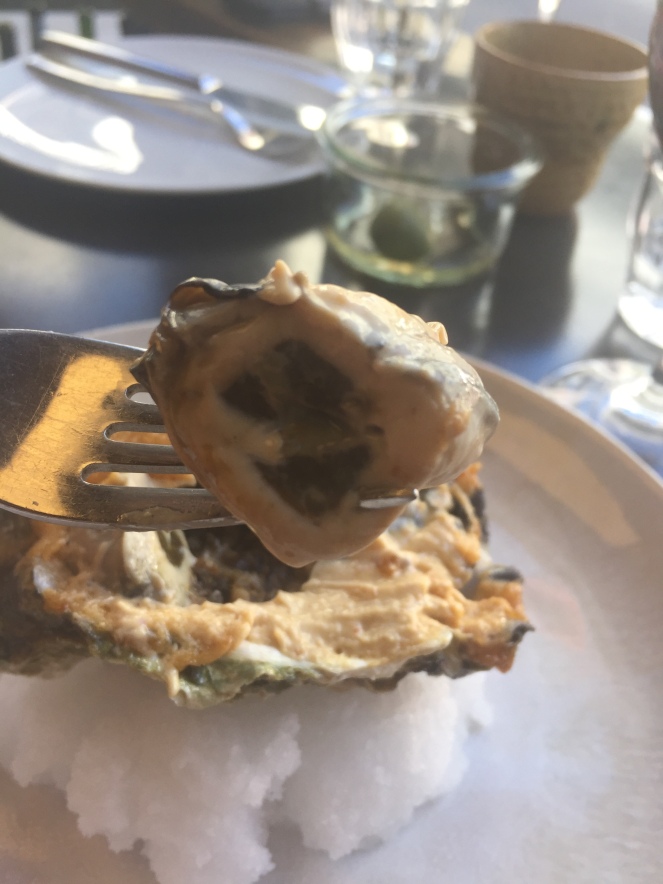 Jaime mentioned the oyster looked so rich, it wouldn’t be possible to eat a second one. My dear friend, you don’t know my stomach at all. I could have easily feasted on six of these oysters.

I ordered a second glass of wine – Domaine de la Charboniere – Vacqucyras ($16). I recognized this bottle as L bought it for me a few months ago. Smooth and full of berry notes. Goddamn, this glass of wine was something. I got tingles all over.

Jaime ordered the Spring Pea Falafel ($16). This was another winner. The falafel balls were large, crunchy on the outside and fluffy on the inside. I could taste cumin. The pea tips tasted like they were just plucked from a garden. The hummus was luxuriously smooth and gave a needed creaminess to round out the drier texture of the chickpeas.

Instead of ordering another oyster (because I didn’t want to be judged by Jaime) I opted for the Stuffed Chicken Wings with yuzukosho aioli ($16.00). The wings were meaty, stuffed with cheese. I thought I could taste a little charcoal in the meat. I want to bring L here to try these wings, as they reminded me of the yakitori we ate in Japan. 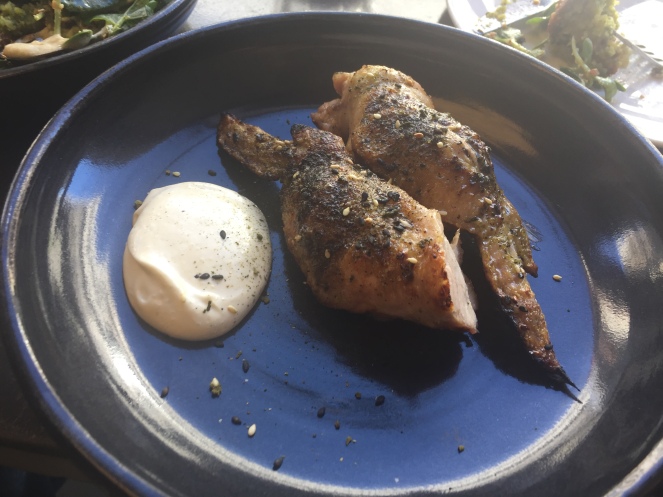 The concept of this bar is delightful. I like trying new wines and not settling for a glass that I don’t particularly enjoy. I love Bar Von Der Fels so much it makes it on Hitting the Sauce’s list of favourite restaurants in Calgary.