Soup received a $150 gift certificate to Earls. She and her partner Ottawa invited me, L, Soccer Mom, and McCartney out for drinks and food. In light of recent news, let’s listen to “Regulate” by Warren G and Nate Dogg.

Our table was next to the patio. We got the best of both words – a view of Stephen Ave, fresh air and spacious, comfortable seating. I preferred to sit inside, as I feel that people who sit on patios on Stephen Ave get stared at by passersby. 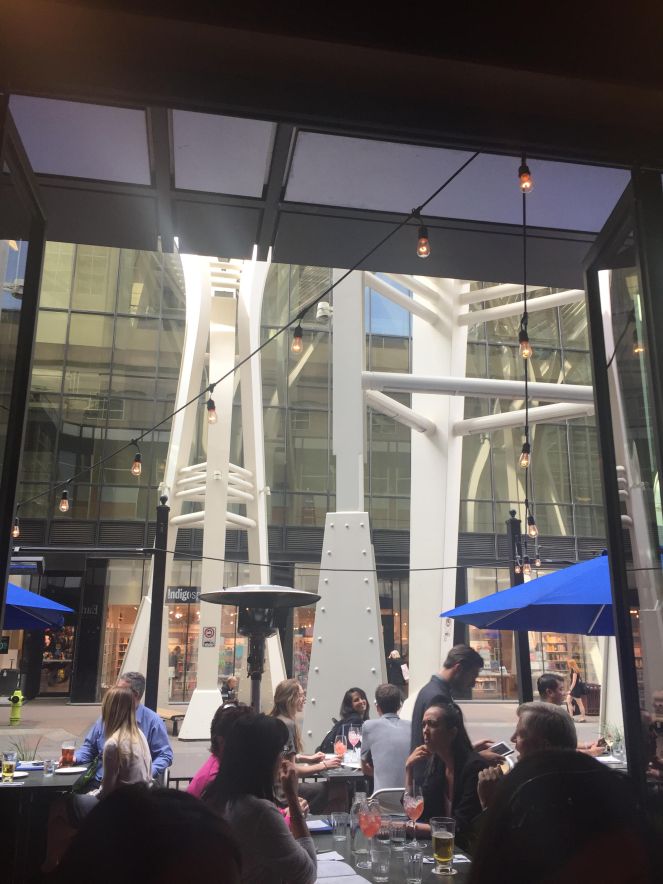 I won’t drink house wine. I can’t do it. Two weeks ago in Kyoto, I ordered a bottle of house wine. It was so nasty that I couldn’t choke it down. Last week, I was at Bank and Baron and my colleagues were drinking happy hour house wine. I went against my better judgment and had a glass too. It was vile. At Earls, I ordered a 9 ounce glass of Quails Gate Pinot Noir ($20.25). I thought it was full-bodied and juicy for a pinot. Delicious. I’d come back to Earls just for a nice glass of wine. 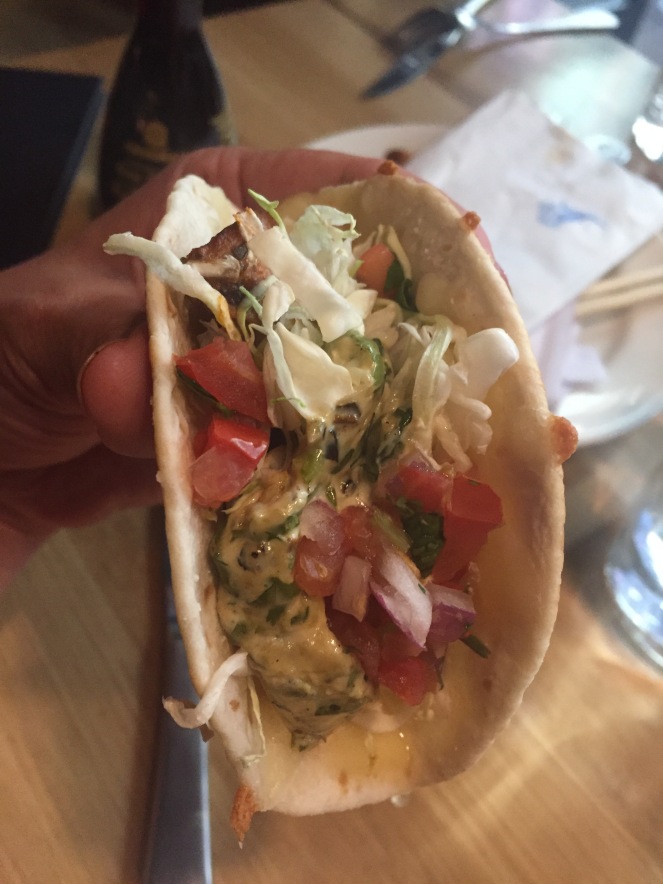 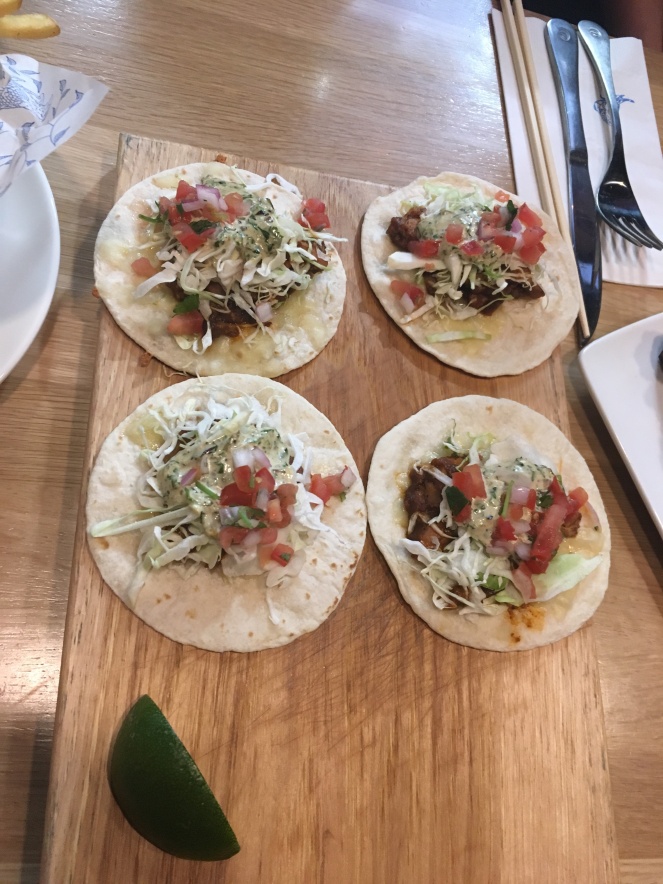 I was surprised I liked the chicken taco so much, because I don’t normally enjoy tacos. The flour tortilla was crisp and held up to the saucy mixture of tender, slow roasted chicken, cilantro, salsa and cabbage. The taste of cilantro was subtle. The combination tasted fresh yet decadent, most likely due to the jalapeño crema and white cheddar. I thought it was odd that Earls named these ‘street tacos’ because street tacos are simple and pretty basic. 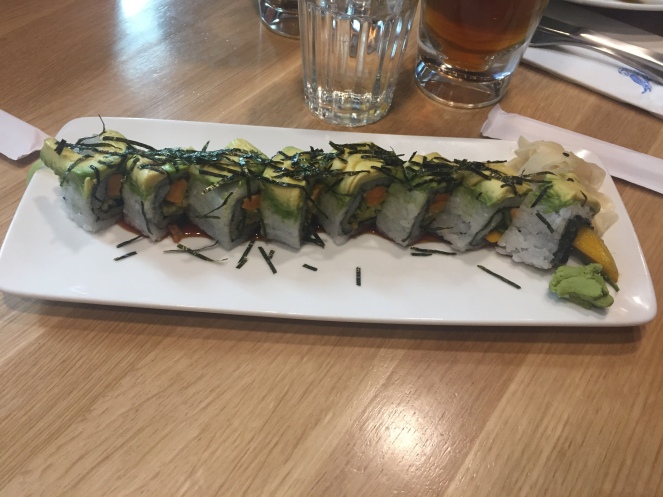 My least favourite item was the vegan Green Dragon Roll. I thought the avocado was too ripe, the smoothness of the texture made me think of how it should have been – firm like cooler than room temperature butter. Also, the rice was overcooked. Ottawa said she would prefer another roll with seafood, but she got this one for Soup. Soup has food restrictions. No seafood, beef, or pork. No fun. At least she eats chicken. I can see her eventually going full vegetarian or vegan. Poor Ottawa. 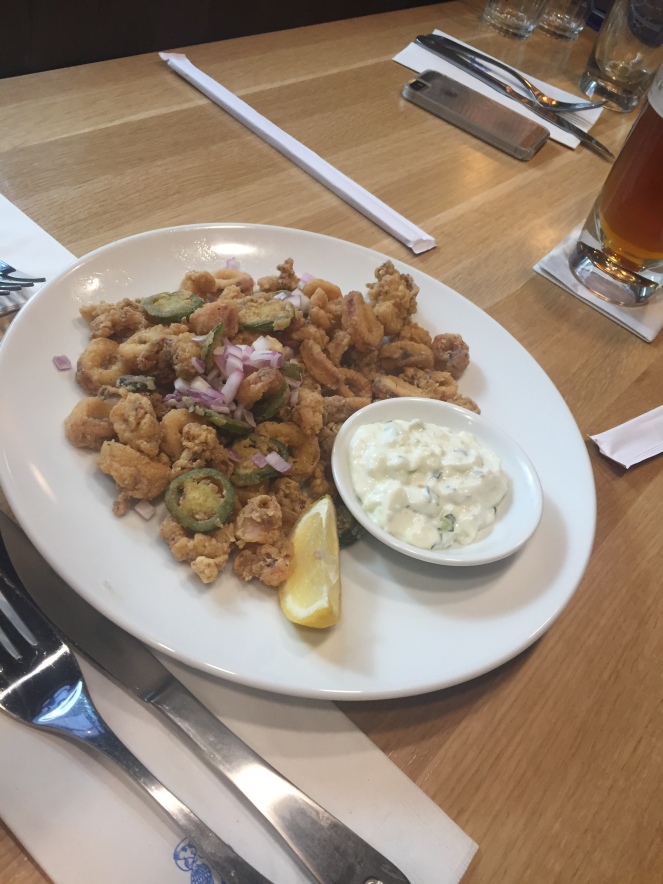 Ottawa and I enjoyed the calamari. The baby squid was nicely battered to a golden, crunchy, munchy. That tzatziki sauce was killer – refreshing, bright and cool on the tongue. 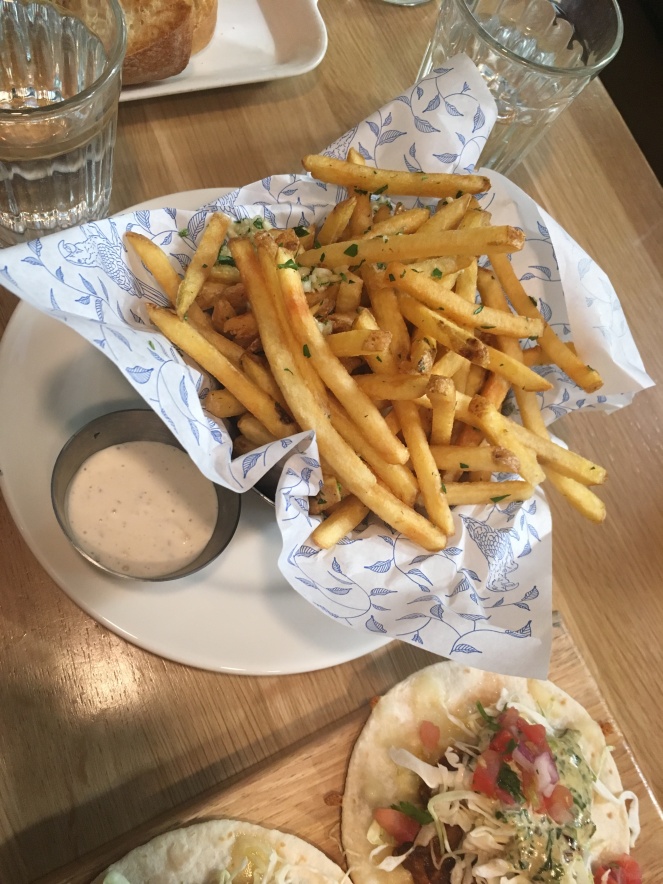 I wanted garlic fries and Soup prefers yam fries. Ottawa ordered both. The fries were just like Palominos, except the latter used a liberal amount of freshly minced garlic in butter, and the fries are thicker and have a crunchier shell. 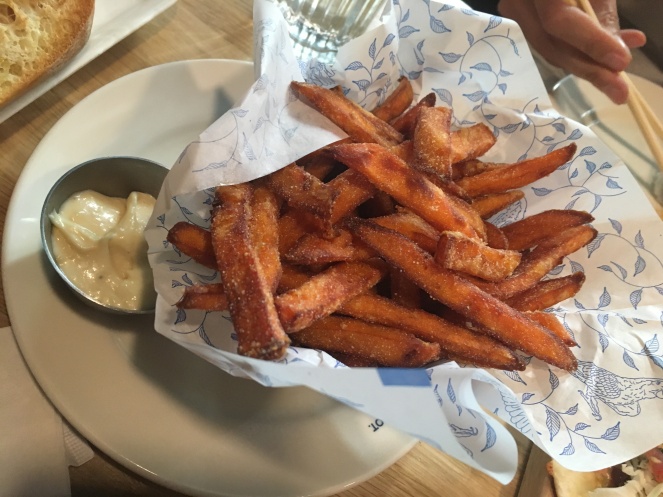 I liked the yam fries more than the garlic fries. I don’t normally like yam fries because I find the flavour taste fake. Earls make a batch that taste like it’s actually a yam and the fries were fat and crispy, just the way I like them. 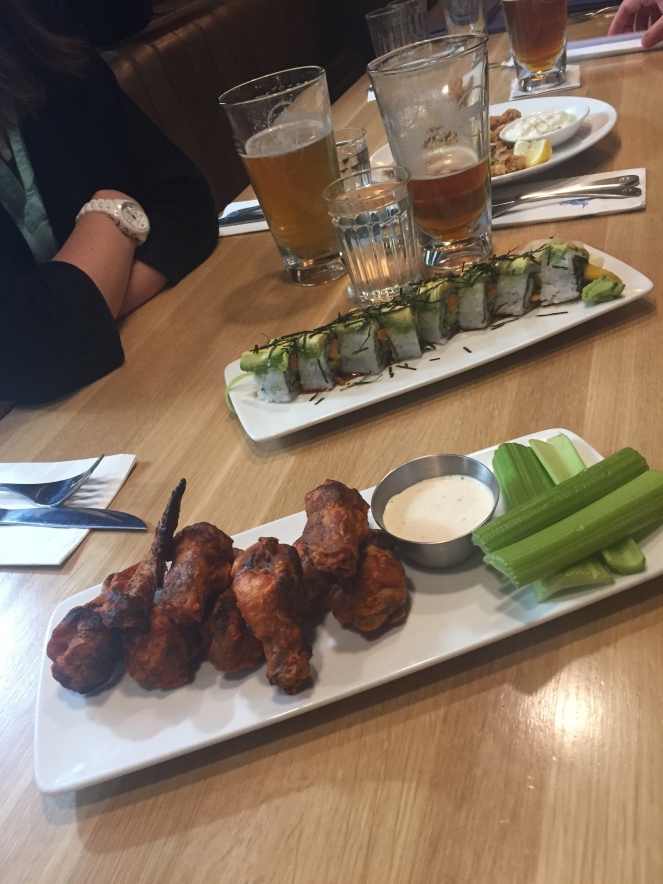 One of my favourite items was the Pan Wings. These aren’t on the menu but our server told us it’s her favourite because they are twice baked and spicy. The sauce was tangy and the skin was crisp. There was a lot of white meat on them bones. The celery was fresh too, sweet and crunchy. 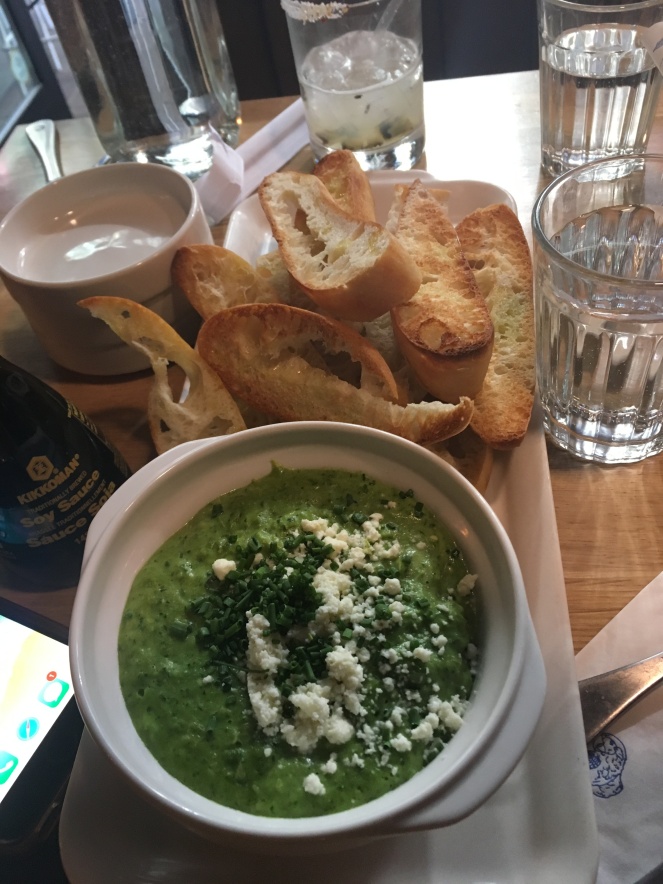 Finally, we tried the spinach and three cheese dip. The menu said the dip came with warm, toasted flatbread. It looked like focaccia bread to me. The dip was thick, creamy and generously portioned so each piece of bread could be slathered. The topping of snow-white feta was a nice touch – it added a little sharpness and tang to it.

Thank you Soup and Ottawa for using your gift certificate on us. Also thanks to McCartney who swooped in and took care of the remaining bill. I plan to have the gang over for dinner at my place soon. Looking forward to the next food extravaganza.