When you are a foreigner, obtaining group tickets for sumo is difficult. L tried to buy tickets right when they went on sale, but they were already sold out. When he attempted to go through a third party, the tickets available cost 10, 000 Yen and upwards. The only other alternative was to leave our hotel at 5:15 a.m., and wait in line for the nosebleed seats (2, 200 Yen) at the very back of the stadium. For this post, let’s listen to Patience Gets Us Nowhere Fast by Capital Cities.

Everything in Japan is efficient and orderly. When we waited in line, an employee would periodically come out to ensure we were standing in two lines, side by side. This was important because when the tickets were distributed, an employee would walk between the two lines to simultaneouly hand out tickets.

The tournament begins at 9:00 a.m. The top sumo contenders come out in the last hour, around 5:30 p.m. You are allowed to exit only once during the entire day. Most of our group threw a newspaper or bottle of water on their seat and left. They returned when L suggested they come back as people were trying to take their seats. We spent hours telling other fans who came up to the two long empty rows that all the seats were taken. One foreigner look pissed off and I could see he was pondering just taking the seats. TJ said it is not Japanese to claim a seat and then abandon it for most of the time.

At 11:00 a.m., I picked up a bento box (1, 100 Yen). My box had over 15 items, many of which were tofu and vegetable-based. There was one deep-fried minced meat patty and a weiner, but other than that, it was relatively healthy. 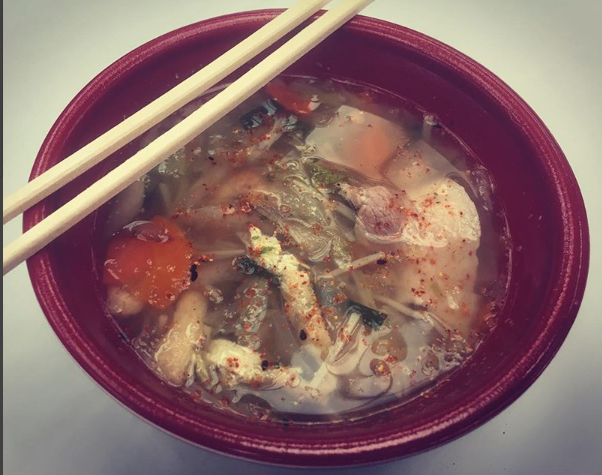 I always look forward to eating the tournament’s special chanko soup. Chanko is a hot stew that sumo wrestlers eat. Each year, a different sumo stable makes a big batch for fans to purchase for 300 Yen. This year, I found the vegetables mushy and the flavour profile wasn’t as well balanced the previous year. For three bucks, I shouldn’t complain.

At around 5:00 p.m., just before the top sumo wrestlers were about to begin, ten members of our group left. I thought it was odd that they chose to leave right when the highest ranked sumo athletes in the world were about to compete. Sumo is not for everyone.

The difference between the wrestlers we saw throughout the day – even the contenders after 5:00 p.m., and the top champions was astounding. Sumo wrestlers may look fat but they are incredibly muscular, flexible and fast. I enjoyed the ceremony and pomp. For the sumo stars, there was a parade of sponsorships before a match, announcing the importance of the wrestlers. Then there was the stretching of the legs, throwing salt in the air and more posturing before the intense, short bout. The actual match lasts any where from a few seconds to a full minute.

Fresh off reflecting on the size of sumo wrestlers, I chose to eat something light for dinner. Oden! I tried a tofu pouch stuffed with mushrooms and mochi. I also ate a weiner wrapped in tofu and shirataki (noodles). And a nice bottle of sparkling sake.

Highlight – the opportunity to watch gifted athletes who dedicate their entire lives to sumo compete against each other in a national tournament that occurs only a few times a year.