In the morning, our group checked out Harajuku in Shibuya. The area is known for shrines, art museums, parks and what was once a fashionable shopping district. Most of the group took off to Takeshita Street, a gaudy shopping strip packed with tourists taking selfies. Takeshita Street is home to a large Daiso, a dollar store popular with well… everyone but L and I. For this post, let’s listen to “Rich Girl“ by Gwen Stefani in honour of her controversial Harajuku Girls.

One thing I never get tired of doing is walking through the evergreen forest to Meiji Shrine. The air smells of pine and damp dirt. The shrine is dedicated to the spirits of Emperor Meiji and his wife, Empress Shōken. I’m not into deifying people or the dead. However, I did pay my respects to the sake and beer barrel walls. 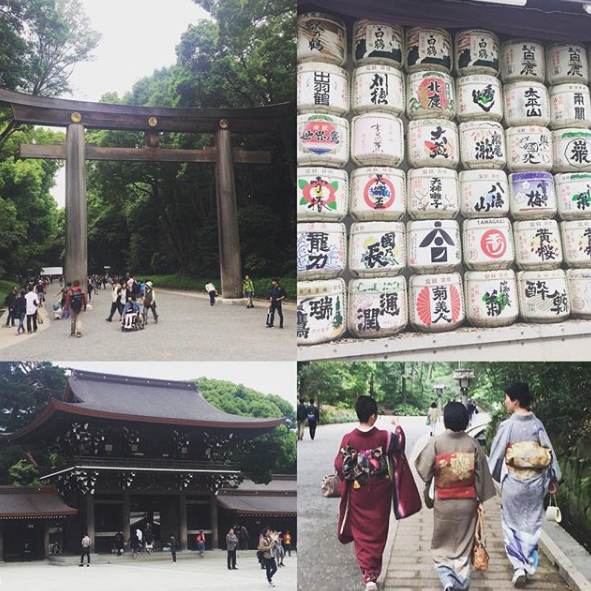 Cáscara suggested we try Japanese craft beer at Baird Brewery. Unfortunately, that meant we had to walk through Takeshita Street. If you look at the bottom of the photo, you can see me with an expression similar to the famous Expressionist painting – The Scream – by Norwegian artist Edvard Munch.

Baird Brewery is on the second floor at the end of one of the quieter corners of Takeshita Street. The decor is very Japanese – consistent with cute and quaint details throughout the taproom.

L, Cáscara, TJ and I selected a flight of three beers ($1000 Yen). I wasn’t keen on any of them. Most of the options included lagers, ales, and IPAs. The one wheat beer – Wheat King Wit – tasted flat and one dimensional. I counted about 16 beers, three of which were seasonal.

TJ ordered Beer Battered Chicken (700 Yen). I ordered Pork Bowl (700 Yen). The pork was thinly sliced and the edges were curled from grill. Delicious, but delicate and paper thin. Proportionally,  there was too much steamed rice to the six slices of pork. Maybe I wouldn’t have minded if the rice wasn’t wet. The rice tasted like it was taken out of the cooker before it had time to set. The grains were still hard. I should have ordered what I saw the locals eat – beer infused edamame, raw vegetables and yakitori.

Beer was decent, but not as good as the two I tried at Towa. Would I return? Yes, not for a meal but for a chance to rest my weary body and soak in the cheery atmosphere.