I saw on Foreign Concept’s Instagram account that they were hosting a viewing party for Chef Jinhee Lee, a Top Chef Canada contender. Cover charge was $10, with all proceeds going to Brown Bagging for Calgary’s Kids. Included in the cover was a complimentary cocktail by award winning mixologist Christina Mah (Klein + Harris Restaurant) and a ticket for the draw prize.

I was pleased that we were seated in front of the television next to the open kitchen. I have terrible eyesight and I wouldn’t have seen a thing otherwise. As we were next to the kitchen, we could see all the dishes being prepped. I admire Chef Duncan Ly’s  attention to the quality of his food. I saw him cooking and personally looking over every single dish that was sent out. 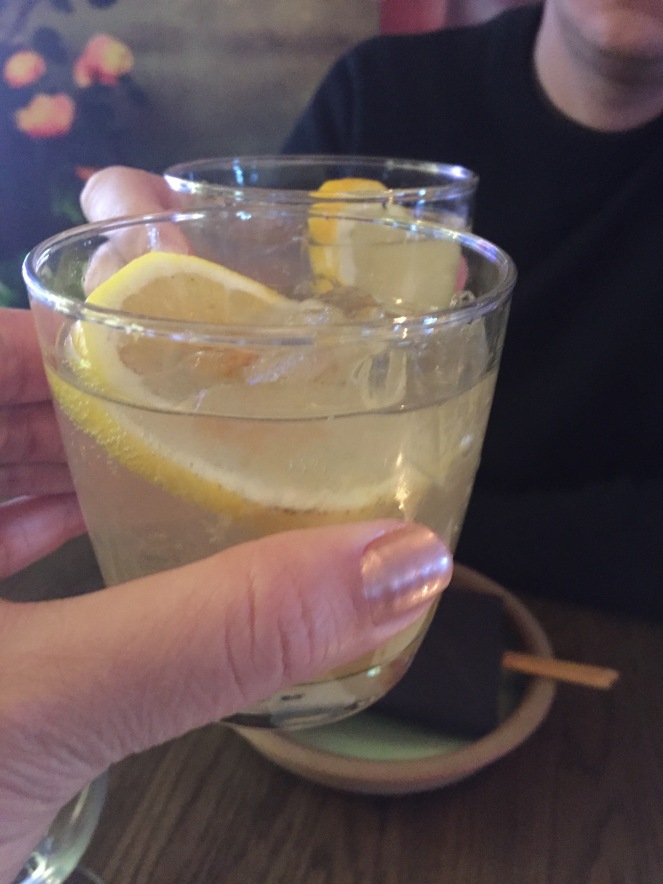 Our gin lemonade cocktail was bubbly, light and refreshing. I thought I could taste ginger in our cocktail. I also ordered a lip smacking merlot (Seven Falls Merlot, Washington, $12), which I already plan to order again at the next Week 2 – Top Chef Canada Viewing Party.

The miso honey poutine was ridiculously good. The taters were crunchy and the cheese curds were hot and molten. When I pulled out a piece, the string of cheese grew into a thick chewy strand. That miso honey sauce was mouth watering, with  the perfect balance of sweet to salt. I would order this again.

The Money Bags were a fancy har gow. The shrimp ball was plump and flavourful. The skin was thick and toothsome, perfectly steamed so it was neither gummy nor moist. The sauce underneath was subtly spicy and sweet from the pepper jam. I would order this again.

It was thrilling to watch Jinhee Lee on television and to cheer for her live during her elimination challenge win. She kicked some culinary ass and as resident judge Janet Zuccarini noted, Jinhee’s red curry chicken dish was ‘flawless’. I’m looking forward to attending Foreign Concept’s next #TeamJinHee viewing party on April 15, 2018.