I was sick after Beep Beep’s birthday dinner. I knew it wasn’t from the dinner as I was nauseous much earlier in the day. When I woke up on Sunday, I hung out with Naomi until Beep Beep picked me up to visit my father Ludwig and then to the airport.

On the way to see my father, I received an email from him saying not to bother dropping by because he wouldn’t be home. Ludwig wanted to go to the mall instead with my brother Jacuzzi. Alrighty then. Beep Beep suggested we eat something nourishing before my flight. I picked Banh Mi Tres Bon in Richmond because I felt like pho and Banh Mi Tres Bon’s version is MSG free. For this post, let’s listen to Fever by Peggy Lee.

The cafe was busy. We were given a number and waited until a table opened up. Customers were also ordering take-out. The employees were working as hard and pleasantly as they could, though you could tell they were in the weeds. Our orders were messed up twice, but fixed immediately with a smile and a sincere apology.

Beep Beep and I shared the Banh Mi Jambon ($7) – a cold cut baguette with warm slices of pork belly and creamy pate. The filling is sparser than I’m use to in Calgary but the intense flavours made up for the sheer quantity. The baguette was light and airy on the inside and crusty on the outside. I would order this again.

I tried one of Beep Beep’s Salad Rolls ($6). I liked the quality of shrimp – it was bright orange and actually had flavour. The sauce was mild tasting, crunchy from the addition of crushed nuts and spicy from the pool of sriracha sauce.

The showstopper was the Pho ($12). The golden broth was slightly sweet and felt so nuturing, like it was breathing life back into my body. The beef meatballs tasted clean and when you bite into it, you could feel the bouncy texture. I could tell the slices of  beef tenderloin were high quality. The best of the bowl was the addition of bone marrow. The marrow was this rich, mellow decadence that melted in my mouth. The noodles could have been more al dente, but that’s just my preference. 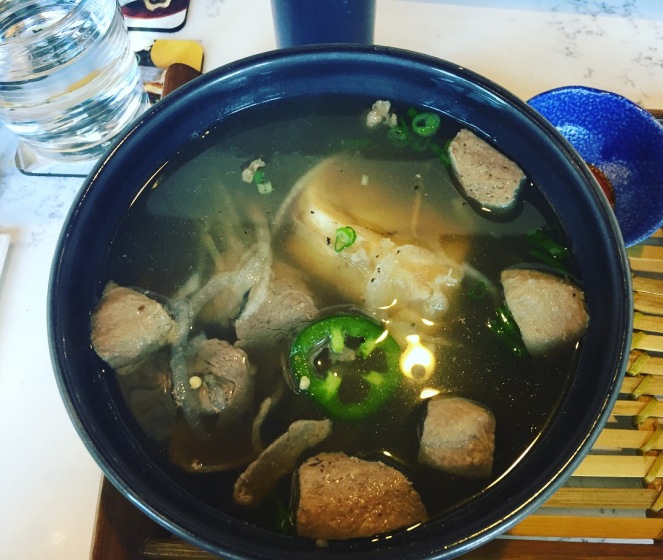 I witnessed a little drama. The customer next to me threw a nasty hissy fit. The server dropped something and then picked it up and replaced it. The customer insisted that the server did not replace it and after arguing back and forth, hissed with pure venom, “Just remove it. Remove it. Just go.” Her eyes narrowed and her face contorted with such ugly rage, she looked like she was going to have a ‘nut fit’ like Heather Cho. It made me think of workplace mistreatment and the abuse servers face in restaurants. I wish I said something to the customer but instead I told the owner in front of the Heather Cho wannabe that I loved her restaurant and the pho was amazing. If that girl gets so upset over a napkin, I shudder to think how she would handle a real life problem.

Unlike the other reviewers on Zomato and Yelp, I did not find the prices expensive. Yes, it’s a bit more than the hole in the wall on Main Street, but the quality is so much better. The portions were generous and I didn’t get that thirsty feeling I sometimes get after eating pho. Hitting the Sauce gives Banh Mi Tres Bon two fat thumbs up.