I’ve been meaning to try Ramen Ichinen ever sinced it opened in November of 2016. Since L and I were shopping in the hood, we stopped by for lunch. I called beforehand to make sure they weren’t sold out of ramen. The person who answered the phone was cheery and helpful. She warned me if I were to come in the next hour, we would likely have to wait a little for a table. Excellent receptionist service always wants me to visit a restaurant. For this post, let’s listen to Donna Summer’s “Hot Stuff(ed)”.

For an additional two dollars at lunch you can add chicken karaage (fried chicken) or cha shu (BBQ pork) bowl, goma ae (cold spinach salad with peanut dressing) or edaname. For three bucks, you can get a seared bonito (fish) bowl or a large portion noodles no extra charge. We opted for a karrage bowl.

When our bowls hit the table, the aroma of the food wafted up. The chicken was hot and crispy. The taste of the nori (seaweed) was prominent. I could detect mirin and the green onions must have been just sliced, because the flavour was intense. The rice was nice –  each grain was firm and separate. 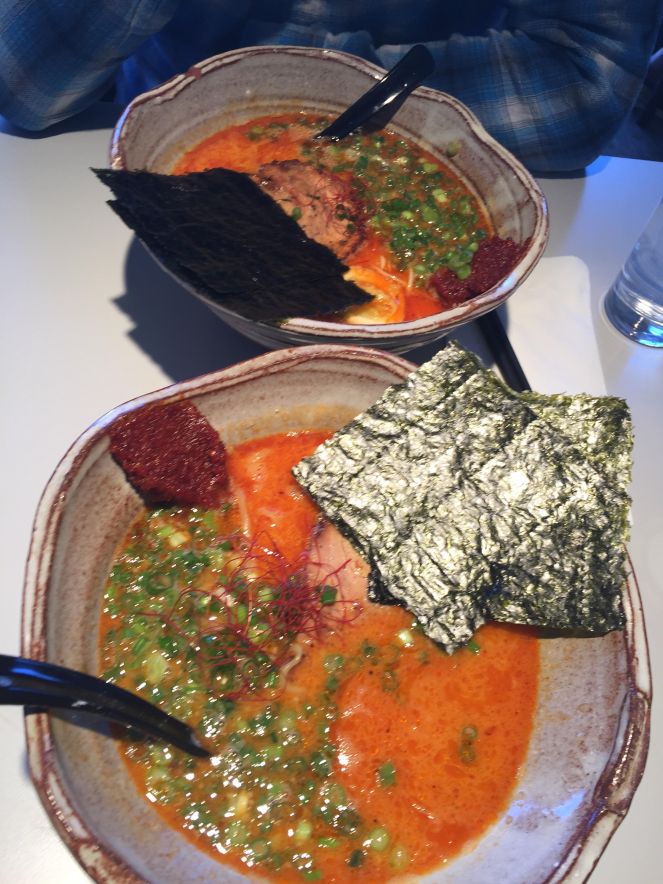 We both ordered the Tonkatsu Red Ramen ($15). I’m glad I didn’t just order the tonkatsu ramen because the spicy red miso gave the broth a much-desired kick. The broth was heavy and rich. 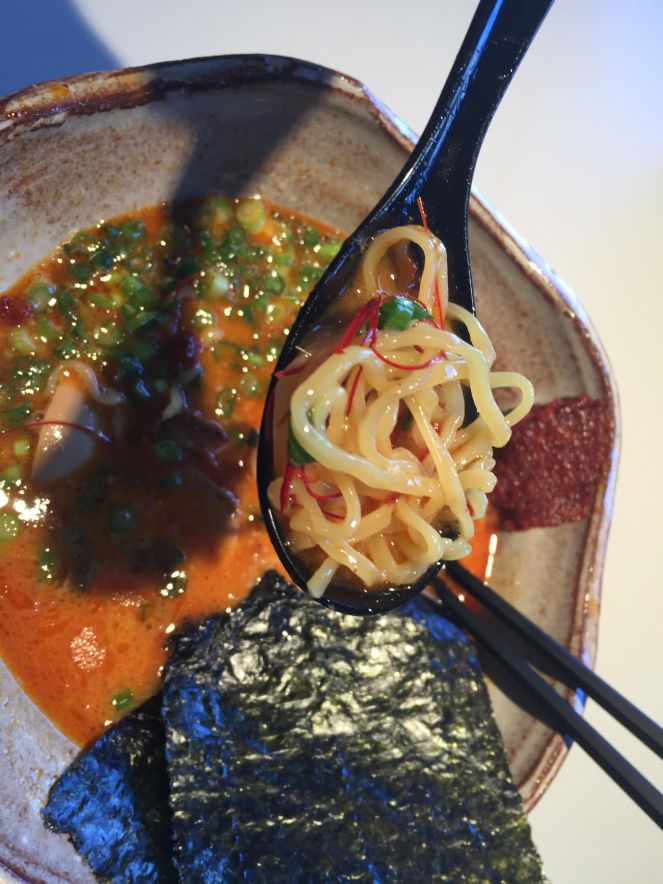 I ordered thick noodles while L ordered thin. Both our noodles were al dente. We preferred the thick noodles as it provided a satisfying chew and brought out the flavours of the broth. I know die-hard ramen fans prefer thin noodles.

The simmered egg was nicely cooked, still soft and creamy in the middle. The yolk just melted in your mouth.

The pork had a lovely roasted flavour. The meat was tender and thickly sliced. The portion was very generous. The ratio of meat to noodles was almost 1:3. Next time I’ll order the lean pork because of the large amount provided.

Halfway through the meal I asked for extra noodles ($2.00). Big mistake. By the end of the meal I felt stuffed. On the ride home, the  sunlight streaming through the windows warmed my face, making me very sleepy. When I came home I took a two-hour nap. I woke up feeling groggy and disgusting. However, my gluttony is not Ramen Ichinen’s fault. L and I both agree, this is the best ramen we’ve tried in Calgary. Hitting the Sauce gives Ramen Ichinen two fat thumbs up and it makes it on her list of favourite restaurants in Cowtown.