Before L and I returned home, I wanted to go out for dim sum with my parents Ludwig and Boss Lady. I planned to pick somewhere high-end because I wanted to treat my family. However, my mother always has the last word and she wanted Shi-Art because there’s a lot of parking. For this post, let’s play Leonard Bernstein’s I Feel Pretty because every time I listen to the Westside Story I think of how Boss Lady would sing along whenever my father would play this recording.

Shi-Art offers 20% off the bill if you eat before 11:00 a.m. The food is excellent by Calgary standards but it’s considered average by Richmond residents. I like the food quite a bit, particularly the seafood. One of the best dishes is the e-fu noodle with scallops and shrimp. The noodles were a bit oily, but the shrimp are large and have a good bite to it. The scallops are huge and nicely seared by the hot bowl.

I didn’t bother to try the haw gow. I know what it tastes like and since Boss Lady always orders way too much food, I passed. L liked it so much he had two dumplings.

Narc tried to put the chicken feet close to L and myself. Boss Lady told him to move it closer to him, as L and I don’t eat it. I can’t stand putting chicken feet in my mouth – the bones are too pokey and make me want to gag. Narc mentioned that his kids love chicken feet because it’s fall off the bone tender. He said the chicken feet tasted good – soft and not greasy. I’ll take your word for it.

The congee was good. This one was filled with large scallops, Chinese mushrooms and large shrimp.

The texture could have been thicker, but that’s just my preference. I prefer thicker, puffier congee over the silky smooth type.

The fried doughnut was nice – light and not doughy. It is greasy though, which is why you dunk it in the congee. Cut that grease with rice gruel.

Sui Mai was average despite the size. The texture was good – meaty and juicy but it lacked a little flavour. Maybe MSG? 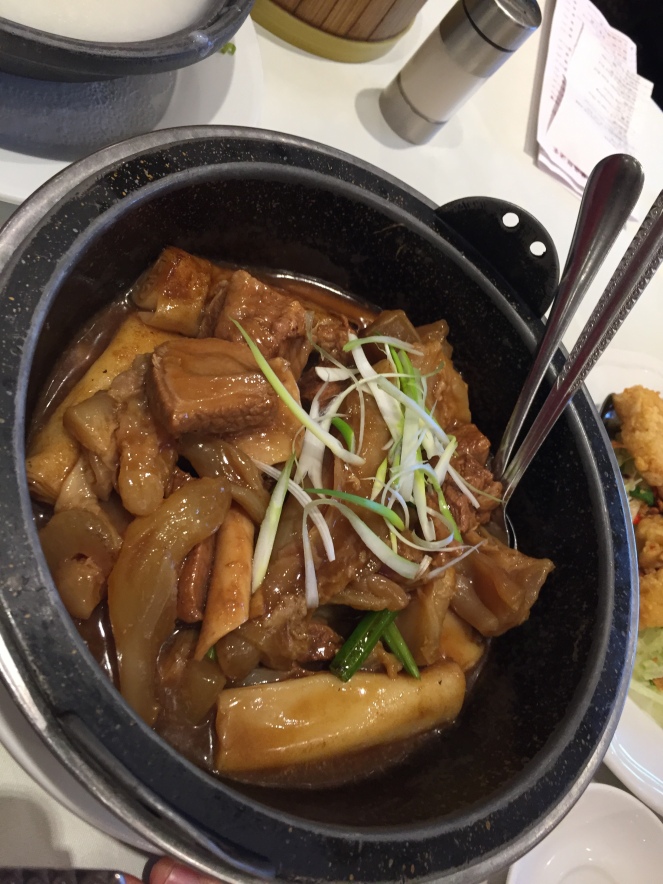 I really enjoyed the beef tendon with rice roll. Office Dad would love this dish. Such a big portion, with tons of gravy sauce. The tendon was very soft and there was plenty of tasty pieces of tender beef. The rice rolls were seared against the hot bowl. A little greasy though. Boss Lady was surprised I like this dish. She said she always orders it when she visits Shi-Art.

The shrimp roll was tasty. The wrapper wasn’t too glutinous and the shrimp had a nice bite to it. Narc took the picture of the shrimp roll because I was getting too lazy at this point. He’s better than I am at taking photos.

The deep fried squid was below average. The squid was doughy and the oil tasted old. If Narc or Boss Lady visits me in Calgary, I’ll take them to Ho Won for their famous deep fried squid. Too bad none of Ho Won’s other dishes are stellar.

One of the best dishes was the fried taro ball with ground pork. The exterior was light and airy. The meat filling was saucy. The taro was soft and hot.

The bill came and I fought hard with Boss Lady for a good minute. I told her if she didn’t let me pay I would hug her. She froze for a second but called my bluff. L tried to pay but my mother easily brushed him off. Narc just smirked while Ludwig stared off into space, probably thinking of the latest episode of Star Trek Voyager.

Why do the Chinese fight over the bill? I read this article but in my experience it’s more about showing respect and in this case, showing gratitude for all their support. Boss Lady said she did all the ordering, so she should foot the bill. However, it was my idea in the first place to go for dim sum, so I should have paid. In the end, Boss Lady agreed I would treat the next time.