My sister-in-law Veggie Girl turned 31! L and I joined her and the rest of my in-laws at Pazzer’s in Montgomery. Both Veggie Girl and my in-laws are from the Prairies, so it seemed fitting we dine at Pazzer’s, a bar outfitted in Saskatchewan memorabilia. Let’s listen to Tegan and Sara as the twins are from Calgary.  For a Vancouverite, that’s a good enough connection to Saskatchewan.

If you aren’t observant or from good old Saskatchewan, you wouldn’t even notice the Prairie references. The bar is small, basic and tidy. I’ve only been to Regina for a weekend, but I know from my in-laws that anyone from Saskatchewan is inherently a good person. Whenever I compliment Veggie Girl to my mother-in-law, she explains, “Well, you know, she’s from Saskatchewan.”

For the table, we shared a dozen of the Pazzer’s Perogies ($12.00). The homemade, hand pinched potato and cheddar were some of the best perogies I’ve consumed. There was loads of creamy filling, the dough was light and toothsome. The onions were perfectly sautéed, sweet and slightly smoky. I would order this again. 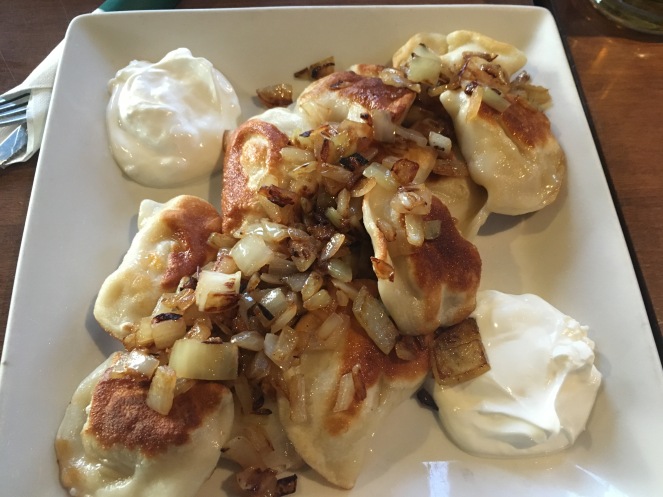 Veggie Girl ordered the Nachos for You ($12.00). The corn tortillas were layered with black olives, jalapeños, green onions, tomatoes and shredded mozzarella and cheddar cheese. The nachos were tasty, but not in the same league as the perogies or wings.

Bobbino ordered Weyburn Wings ($10) in honey garlic sauce and salt and pepper seasoning. I was impressed – the wings were meaty, hot, crunchy and served with carrots and dip. The meat was white and not discoloured. Best price in Calgary – I don’t know any pub that sells a quality basket of wings for only ten bucks.

L ordered the Battleford Brisket ($13.00). The whiskey braised brisket looked skimpy compared to the bun ratio. But when I took a bite, I realized it was plenty, as the carmelized onions, Swiss cheese and horseradish added a lot of saucy flavor to the sandwich. 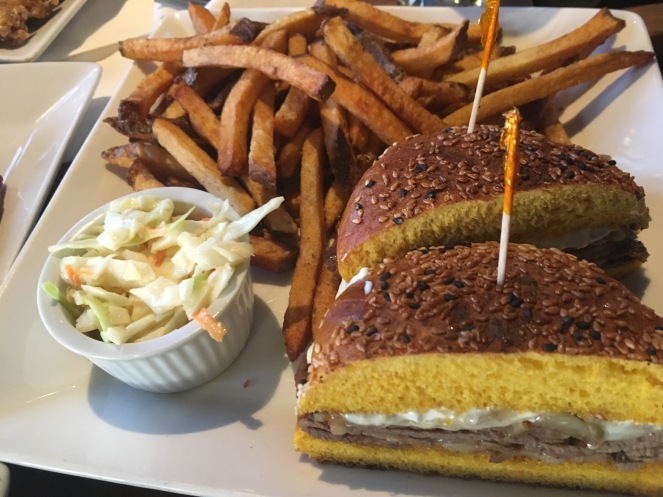 Bobbino’s Steak Sandwich ($11.00) looked pretty average to me. However, the steak was Alberta beef sirloin and for the price, it can’t be beat. Uncle Ben ordered the Clubhouse ($11.00). The sandwich looked pretty good to me, piled high with ingredients.

G-Mah ordered the Perogies, Cabbage Rolls, Kolbasa ($15.00). I didn’t try a bite but it was so good she cleaned her plate. The grilled sausage was split into two, it looked tantalizing with the grill marks.

I would like to make Pazzer’s a regular spot for wings and perogies. The fish and chips are next on my hit list. Hitting the Sauce gives this Saskatchewan Pub two fat thumbs up.