Bow Tie Pizza invited me to try some of their product for free. After I read Jomar’s posting on Zomato about his positive experience, I was game. For this posting, I selected Miike Snow because Bow Tie’s vegan pizza makes me a little Genghis Khan.

From Killarney to Bow Tie, it was about a 20-minute drive. I guess not many other people wanted to cook while there was a heat wave in Calgary because Bow Tie was busy. It also didn’t help that their driver called in sick. I spoke with Yanie who told me the most popular pies were the Beard of Zeus and Mother of Dragons pizza. For the latter pie, Yanie uses Habanero spices from the South Silk Road. 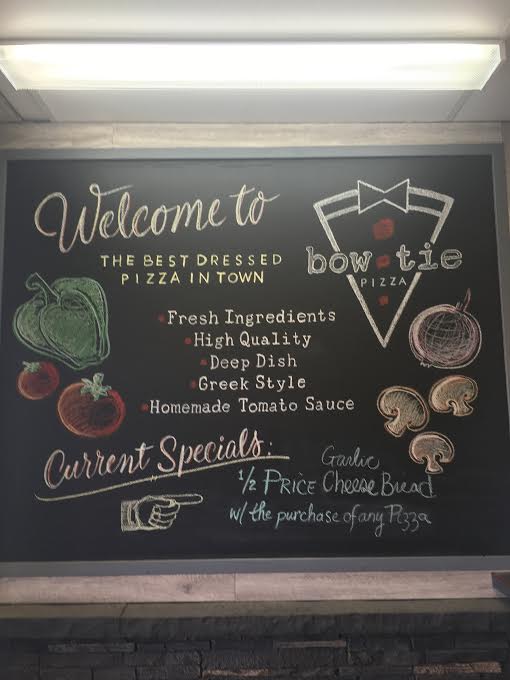 The wings were breaded, baked in the oven and covered in a true hot sauce. Often I’ll go out and eat hot wings that aren’t really hot. Not these ones – it has nice numbing sensation and the flavour of real hot chilies.

A large pizza will feed about three to four adults. The meat eaters I dined with really enjoyed the meat pizza. Everyone was impressed with the amount and variety of meats – pepperoni, salami, ham, and bacon. The sauce was tangy, the deep-dish crust was crunchy and despite all the meats, the pizza wasn’t greasy. The meat pizza was good but it was the vegan pizza that blew my mind.

The vegan pizza was superb. In fact, it’s the best pizza I’ve ever tried and I’m so floored because it is dairy free. The pizza was creamy and so flavourful, topped in mushrooms covered in vegan pesto, onions, green peppers, pineapple, kalamata olives, tomatoes and dairy free cheese. I think it’s the vegan pesto that gives it the magic. The olives weren’t the gross nasty canned type that some other places serve. The vegetables were fresh and had so much flavour. The vegan dip was rich. The pizza was so decadent though you didn’t need any other sauce.

The only thing you have to keep in mind if you have a long drive. The vegan pizza was a little soggy in the center, but I had stupidly stacked the two boxes on top of each other. However, when I heated up the pizza the next day in the oven, it was even better than the night before. This pizza was so good I can’t wait to order it again. Seriously – the pizza was that amazing and it was vegan. This fact still boggles my mind. Hitting the Sauce gives the vegan pizza two fat thumbs up and Bow Tie makes it on my favourite list of restaurants in Calgary.