L came home from work raving about a pizza joint near the Saddledome called A Perfect Pizza. One of his top students – R – brought four large pizzas to class. L told me that R’s parents pride themselves on serving up fresh and inexpensive pizzas. This place gets very busy after a Flames game. People leaving the Saddledome drop by for a pizza by the slice or order take-out. There’s also parking if you’re picking up a pizza. 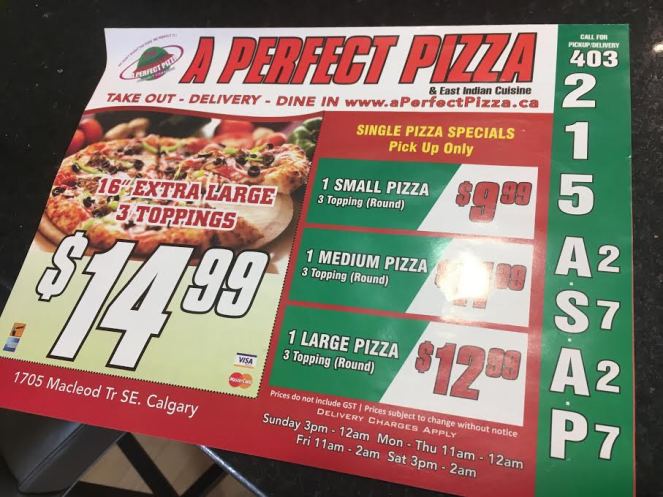 On our way to pick up the pizza, L asked me to order him a pizza. I asked him what type of pizza he wanted. He said he wanted a special pizza. I asked him for details such as “Mushrooms? Pepperoni? Green peppers?” He made a face and repeated he wanted a special pizza. I called and I could tell the person who picked up the phone was busy with another customer. I asked for a special pizza. The man replied that they had a lot of specials, as in two pizzas for a set amount or a large pizza with wings and a bottle of pop. This went on for a bit until I could feel my face turning red with frustration and I felt like my head was going to explode. I requested a large deluxe pizza or anything that came close to that description.

The pizza took about ten minutes. The owner kindly gave me a flyer so that I was aware of the specials. I declined his offer and told him I already had a flyer. He asked me then why didn’t I know about the different specials. I explained that the flyer was at home and my husband asked me to call while we were in the car and all he said was he wanted a special pizza but offered no other details. 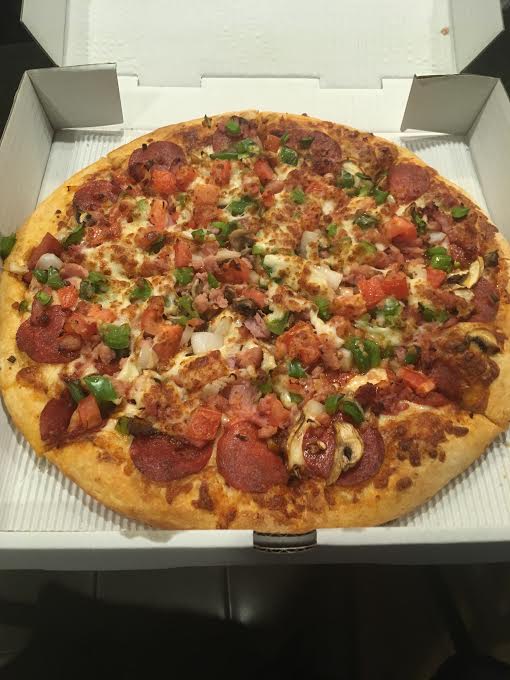 The following week, we ordered again. This time we tried hot wings ($8.99) and a large butter chicken pizza ($18.99). The wings were good, not the typical generic Frank’s hot sauce type you get on cheap wing night. The sauce was spicy with more complex notes. The wings themselves weren’t fried, but tender and meaty.

The butter chicken pizza was delicious. I really enjoyed the slightly sweet, creamy tomato sauce and chunks of chicken. I want to try the tandoori chicken with paneer pizza next. 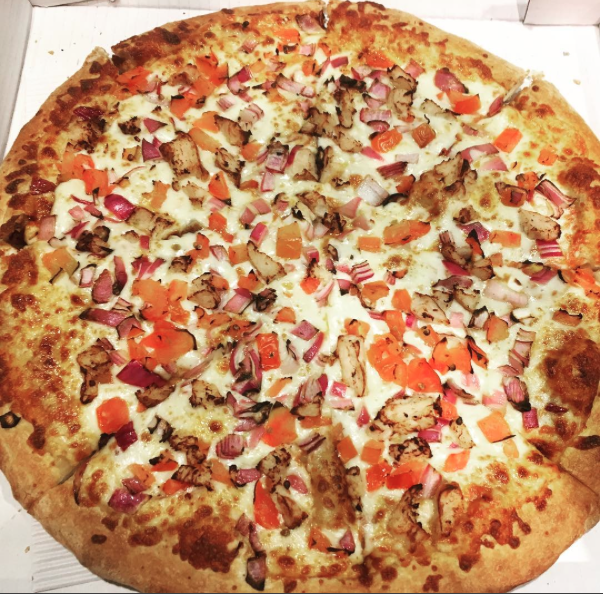 I can see why L likes this pizza. It’s a good, honest pizza. There’s no glamorization of the toppings or a history behind the flour. You can’t order truffles or any gourmet ingredients. The crust isn’t cracker thin or deep dish. The amount of toppings was proportional to the medium size crust. The price is great and ideal if you are feeding a large family or crowd.