On Friday night, I met up with my friend Naomi and her sister Gisele for drinks at Kissa Tanto in Chinatown. Naomi told me it took her two weeks to get a reservation. Apparently Kissa Tanto has a solid reputation for its creative food and cocktails.  There were also enough vegetarian options on the menu to satisfy Naomi and Gisele vegetarian diet. 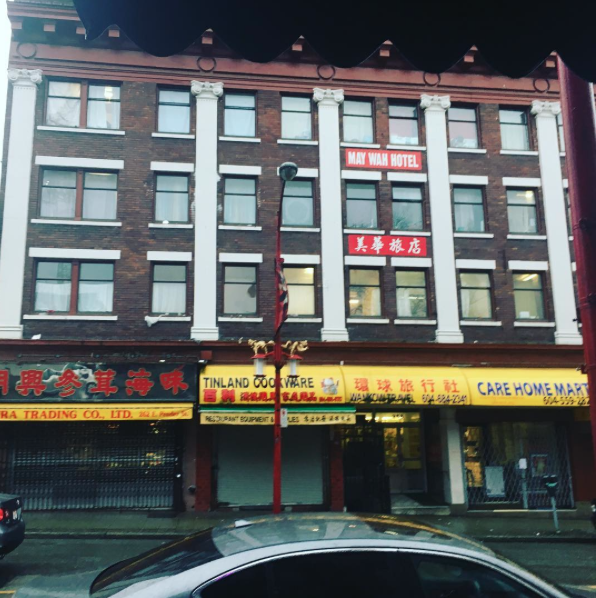 I love Kissa Tanto’s retro decor. It has a distinctly 70’s vibe to it that makes it feel like you’re dining in another era. The old building itself is old school. It has a small landing and the steep stairs up to the restaurant. The street itself didn’t seem to change much from my childhood memories of Chinatown in the 1980s.

Naomi and Gisele ordered specialty cocktails, chosen by our server based on their preferences. I ordered an Asahi beer because I wanted to ease into drinking again.

I had to leave shortly after we arrived to make it to Beep Beep’s family dinner at Kingyo for a birthday dinner. However, Naomi ordered one dish for me to taste – croquette ($7). The croquette was typical – crunchy exterior with a super smooth potato and parmesan filling. I’d like to return on my next visit to give it a spin.

I grew up with Beep Beep and her family would take me out for dinner at least once a week. Kingyo is one of our regular spots for celebrations. Her family knows how to order, particularly at Japanese restaurants. 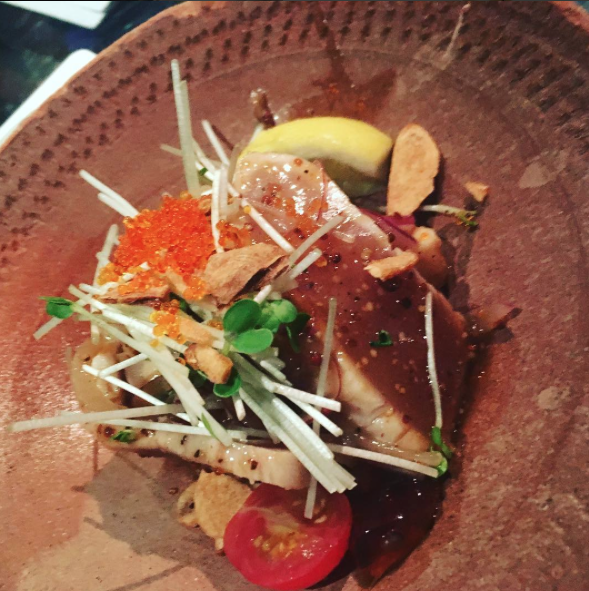 We started off with the seared tuna ($12.80). The tuna in particular tasted super fresh. The pea shoots, cherry tomatoes and crunchy tobiko rounded out this salad.

The one-grilled kobe beef ($24) was neat. You seared the marinated beef on the stone to lightly grill it. The beef was very tender and flavourful. 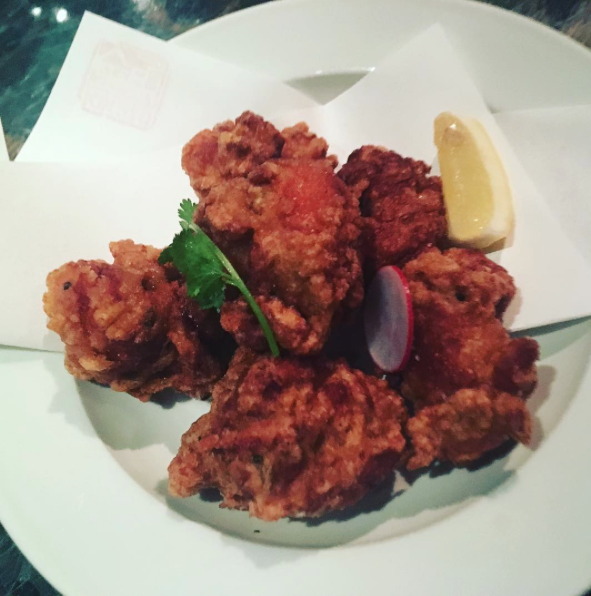 Beep Beep’s husband Mars doesn’t eat seafood or mushrooms, which really limits what he can eat at any Chinese or Japanese restaurant. He ordered two plates of the chicken karrage ($9.40) for himself. The karage here is solid – crispy boneless chicken served with salt. Good but not as great as Shokunin’s version in Calgary.

Mars could eat the Chinese sweetened balsamic beef rib ($22). The rib meat was soft and fatty (in a good way), sweet from the balsamic vinaigrette. Mar’s liked the presentation, which I thought was pretty standard for Chinese restaurants. Edith offered the last piece to Mars, but he complained it was all fat. Edith chided him and said that fat has all the flavour. She’s right.

I also enjoy the fresh sashimi salad ($12.80). The tuna in particular tasted super fresh. The organic greens were tossed in light garlic soy sauce vinaigrette that went well with the sashimi.

I enjoyed the aonori calamari ($9.40), which didn’t look impressive. However, Kingyo’s version was killer due to the seasoning of dried seaweed powder and the tartar sauce with shiso herb salsa. I accidentally deleted my photo of the calamari.

My favourite dishes were the negitoro sushi and pressed sushi ($14). If you’re stuck in a land lock city like Calgary, you really appreciate the care that goes into the sushi here.

The amount of chopped tuna was generous, and the addition of the Japanese pickles, green onions, and tobiko added a refreshing element and crunch to the soft texture of the tuna. The wasabi sesame soy dressing and wasabi added a nice pop to it.

The pressed mackerel was another winner. The seared marinated mackerel was warm; the oily meat contained a whack of flavour. The sauce of mustard and soy sauce, green onion and ginger paste oil went really well with the strong taste of the fish.

I don’t normally like bibimbap as some restaurants in Calgary don’t make the bowl hot enough to make the rice crispy. That’s not the case at Kingyo. The tender pieces of pork belly sizzled beautifully in the bowl, the oils released seared into the rice.

One of my favourite dishes is the uni miso udon ($13.80). I avoided this dish for two reasons. First, I could tell it was popular one and the portion wasn’t big enough for everyone at the table. Second, I know this dish is deadly, calorie-wise. The udon noodles are covered in sea urchin and sweet miso cream sauce, topped with salmon caviar. I drooled a little as I watched everyone else lift the cream covered noodles to their mouths. The deep-fried corn was another winner ($5.80). The corn was sweet and crunchy, drenched in soy butter.

Beep Beep’s favourite dish was a March feature – cold tofu with bread. The tofu was creamy like cream cheese. The combination of the bread and tofu reminded me of brie on a baguette. I didn’t really understand why she liked this dish so much. It was good, but I could make this at home.

Another feature dish we tried was the grilled asparagus with prosciutto, bocchini, and a sweet balsamic reduction sauce. I thought this dish was very Italian. I didn’t notice any Japanese influences. Regardless, it was a nice dish. 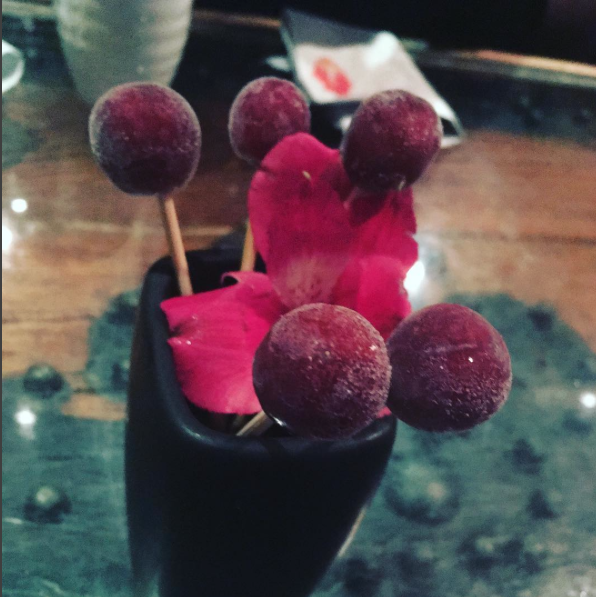 I had an argument recently with my in-law Dhiss. He said he loves Guu in Vancouver. I told him to try Kingyo as the food is better but he insisted Guu was the best despite not trying Kingyo. I don’t know how you can believe one restaurant is better than all else when you’ve never tried other restaurants. His loss and Kingyo’s customers gain. Kingyo is completely packed and busy every night, it doesn’t need more business from non-believers.