After watching the results of the USA 2016 election,  I felt pretty bummed out. I dragged my sorry ass to work, humming R.E.M’s It’s The End of the World. To snap out of my mood, I asked Asian Persuasion, Office Dad and What’s up Hamsup if they wanted to go out for something soul satisfying. I had already brought my lunch, but I have a habit of eating out when I’m having a bad day. Asian Persuasion suggested Umami Noodle Bar because it wouldn’t be too busy and the ramen was good.

There were only two tables of three customers when we arrived. However, my ramen took 35 minutes to arrive while Office Dad and What’s up Hamsup had to wait 40 + minutes. I was peeved that I came back to work so late. Let’s just say trotting into the office after an extended lunch doesn’t win you any brownie points with my boss.

Was the food worth the wait? The Tonkotsu Spicy Ramen ($12.50 plus $1.00 for the soy sauce egg) was tasty. I didn’t like the spicy red sauce as it tasted a bit harsh to me, like Korean hot sauce. The noodles were skinny and not overcooked. That soy egg was marvellous. The creamy orange egg yolk had a subtle amount of salty goodness. The pork belly was the best part of the bowl,  the fatty edges were beautifully seared, the leaner bits melted on your tongue.

I ordered the cha shu Don ($3.50), which was worth the calories. The cha shu (BBQ pork) was finely cubed, sprinkled all over the rice, topped with Japanese mayo, a sweet brown sauce, red tobiko, and green onions. Savoury, sweet, and creamy all at once.

What’s up Hamsup’s ordered the Tan Tanmen ($13). The peanut broth was fragrant and nutty. I preferred his broth over mine. If we return, Asian Persuasion and I would both order the Tan Tanmen ramen. 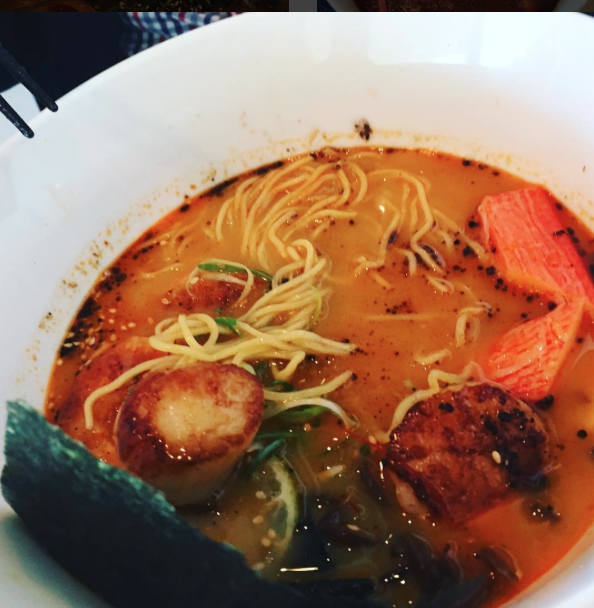 Office Dad thought the broth of his Tom Yum broth ($13.50) ramen lacked flavour. He said the seafood was okay. He ordered the pork and beef curry don ($4.00) and he said there was barely any meat. What’s up Hamsup concurred, but Asian Persuasion said she liked taste of the  curry, which reminded her of Redheads Cafe.

My  favourite place for ramen is Jinya in Vancouver. In Calgary, I’ve tried Muku, Shokunin, Shikiji Japanese Noodles & Sushi, Redheads (which is the best of the bunch for the price). I’ll have to give Ramen Ichinen, Shiki Menya, Ikemen Ramen Bar, and Gagana Ramen a chance before I give my vote on best ramen in Calgary.

One thought on “Umami Noodle Bar”